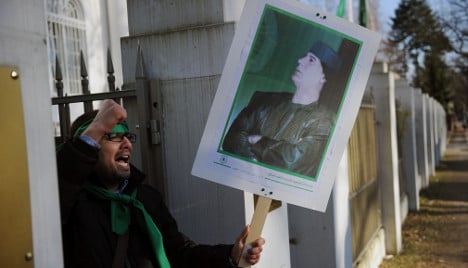 An pro-Qaddafi demonstrator outside the Libyan embassy. Photo: DPA

“The foreign ministry today summoned the Libyan ambassador in Germany. He was informed that five Libyan diplomats have been expelled and have seven days to leave Germany,” a statement said.

“The reason for the expulsion is pressure being exerted on Libyan citizens in Germany.”

Focus magazine reported this week that the diplomats had spied on dissidents living in Germany, and that federal police and the foreign and domestic intelligence services had discussed the case with Chancellor Angela Merkel.

The Federal Office for the Protection of the Constitution (BfV) believes the Libyan foreign intelligence service has long been spying on Libyan opposition groups in Germany. The Libyan service had recruited Libyan asylum-seekers with Islamist tendencies, news magazine Der Spiegel reported on its website.

The targets of the spies’ attention would generally acquiesce because they feared for the lives of family members still in Libya, the BfV reported in 2009.