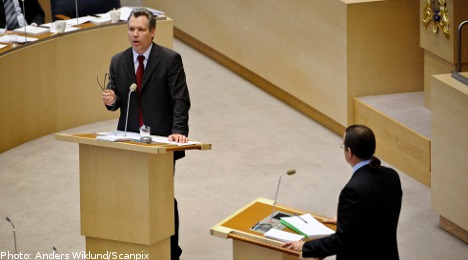 Borg opened the debate by underlining Sweden’s strong state finances and buoyant economy, laying out a swathe of tax cuts and initiatives to meet the Alliance coalition’s election promises in full, barely a year into the parliamentary term.

Borg explained that government policy aimed to secure jobs and welfare with the goal of full employment.

“We should have the strength to face the next recession, even if it gets brutal. And we can only do so with sound public finances. It is now time to build up the stocks,” he said.

“Open unemployment will come in at just over 3 percent, the levels Sweden reached during a booming 1980s economy,” he said.

Tommy Waidelich agreed with Anders Borg that things are going well for Sweden, pointing out that everyone has reason to rejoice that the economy is doing well, growth is strong and that households can consume.

At the same time he reminded the government that this would not have been possible without the budget clean up carried out by the Social Democrats.

“The most urgent matter is that there is mass unemployment, while employers want to hire. Seven out of ten companies have found it difficult to recruit,” he said.

Waidelich argued that the Riksbank was forced to raise interest rates prematurely due to the government’s cutbacks on training and in the labour market.

“This is an area where I see no action from the government in the spring budget bill. It moots further tax cuts, but there are no measures against labour mismatching.”

“There is a risk that it harms growth in the form of higher interest rates,” he said.

Anders Borg meanwhile welcomed Tommy Waidelich as the new Social Democrat spokesperson on economic policy issues and said that he looked forward to agreements with the Social Democrats whenever possible.

With the pleasantries over, Borg attacked Waidelich for wanting to raise taxes for all workers, while raising benefits for the sick and the unemployed.

Green Party spokesperson Mikaela Valtersson meanwhile accused the government of having run out of policy ideas.

She stressed that there is another reality in Sweden where single parents find it difficult to make ends meet, and seriously ill people are forced to live on the bare minimum.

“It is unworthy of a welfare state like Sweden, but it is also wasteful and inefficient,” Valtersson said.

“After five years the government has realised that sickness benefits are for the sick. Soon perhaps they will realise that unemployment benefit is for the unemployed,” she said, referring to the government’s announcement on Tuesday that it is to review the sickness insurance scheme.

Johnny Skalin of the Sweden Democrats used the debate to invite the Social Democrats into a cooperation.

Skalin argued that his party believes that there is significant scope for cooperation in several areas, such as the sale of state companies, which was recently blocked in parliament.

He continued to cite improved unemployment insurance and health insurance, and a return to railway regulation, as further areas where the two parties think alike.