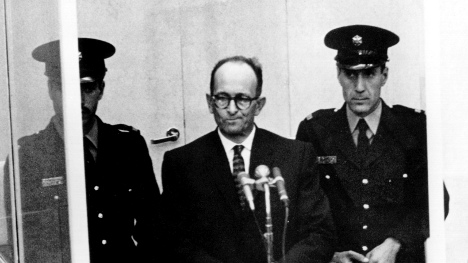 Legend has it that in 1958, when Nazi-hunter Simon Wiesenthal closed his office in Linz, Austria, and moved to Vienna, he kept just one file: that of Adolf Eichmann.

Wiesenthal and many other investigators had worked hard through the late 1940s to track down the architect of the Holocaust, in which about 6 million Jews were murdered by the Nazi regime. But by the late 1950s, Eichmann loomed large as the major Nazi figure who had evaded capture.

When Eichmann was finally captured in Argentina in 1960 and put on trial a year later in Israel, exactly 50 years ago on Tuesday, it was a watershed moment in the pursuit of Nazi war criminals and justice for Holocaust victims and survivors. It was, Zuroff told The Local, a shot in the arm for Nazi hunters like Wiesenthal, a milestone for Israel, and the first real chance for many survivors to tell their stories.

On Tuesday, the half-century anniversary of the start of Eichmann’s eight-month trial will be marked in Israel, Germany and the United States, the Israeli government has announced. The Nazi official responsible for masterminding the logistics of the “Final Solution,” as it was called, was eventually convicted and hung.

His capture was a story straight from the thriller novels. Throughout the 1950s, Wiesenthal gathered solid information that Eichmann was hiding in Buenos Aires, the Argentinian capital. He passed this on to the Israeli secret service, the Mossad, which sent a team to keep the Eichmann suspect under surveillance.

After several months, they concluded that the man now calling himself Ricardo Klement, a rabbit farmer and foreman at a Mercedes Benz plant, was indeed Eichmann.

Without the knowledge of the Argentinian authorities, Israeli agents snatched Eichmann off the street on May 11, 1960, bundled him into a car and drove him to a safe house. The agents then drugged Eichmann to make him appear drunk, dressed him in the uniform of a flight attendant for El Al airline and flew him to Israel. Their methods, when discovered, sparked a row with Argentina, which complained bitterly about the breach of sovereignty.

Eichmann went on trial in December 1961 in Israel. His efforts to persuade the judges that he was a humble bureaucrat failed, and he was convicted and hanged on May 31, 1962. His mild-mannered appearance prompted writer and political theorist Hannah Arendt to coin the phrase, “the banality of evil.”

“He was the person responsible for all the logistics in the implementation of the Final Solution,” Zuroff said. “Contrary to the image he tried to project on the witness stand, he was a zealous advocate of the mass-murder of European Jews, not some dry, grey, idiotic, brainless civil servant who just carried out orders.”

It was, Israelis say today, a milestone for the Jewish people.

“It marked a turning point in which the State of Israel and the Jewish people began to mete out justice to their persecutors and said: Enough! No more,” Prime Minister Benjamin Netanyahu said at the weekend.

Zuroff, the leading modern Nazi hunter and author of the new book “Operation Last Chance,” which has just been translated into German, said the trial truly revitalized what had become a flagging effort by the early 1960s to catch Nazi suspects.

“The efforts to bring Nazis to justice had slowed down considerably and the whole effort was losing its momentum, and the Eichmann trial revitalized the prosecution of Nazi war criminals in the Federal Republic [of Germany]. That obviously was very important because the most important perpetrators were there or the Federal Republic was responsible for them.

Wiesenthal’s own career as a Nazi hunter also got a major boost, he said.

“His career was revived in the wake of the Eichmann trial. It’s quite ironic. It was the Nazi he didn’t catch that really gave him the push that turned him into the world-famous figure.”

It has since emerged that both the German intelligence agency, the BND, and also the American agency, the CIA, knew of Eichmann’s whereabouts as early as 1952. Only at the weekend it was reported that the SS officer who arrested Anne Frank, had gone on to work for the BND.

Last year, the New York Times revealed the existence of a 600-page report that said the CIA had created a “safe haven” for former Nazis who they used for post-war intelligence.

“There was a lot of dirty business going on, which of course comes as no comfort to Holocaust survivors or people who think Nazi war criminals deserve to end their lives in jail or at the end of a noose,” Zuroff said.

Today, the pursuit of Nazi war criminals is winding down as suspects and witnesses grow old and die. But there a strong final push is being made to bring suspects to justice. John Demjanjuk, a 90-year-old death camp guard accused of helping murder some 27,900 Jews, is being tried in Munich, while Hungarian former police captain Sandor Kepiro – whom Zuroff tracked down – is set to go on trial in Budapest on May 5.

“Obviously it’s getting harder and harder to prosecute Nazi war criminals, but precisely because we’re getting towards the end of this endeavour, in certain countries there is an energetic effort to try to maximize justice,” Zuroff said.