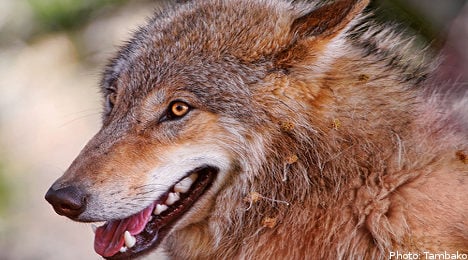 There are currently around 200 wolves in the country and Liljelund argued in the interim statement that the number needs to be boosted to around 450 in order to sustain genetic variation.

Liljelund however pointed out that the figure is based only on a biological assessment and that the final report, which will be presented within a year, will include additional factors, such as the attitudes of local residents.

“This assessment is based solely on biology and ecology and what is required for wolves to achieve a favourable conservation status. It does not take into account socio-economic factors,” Liljelund said on Monday.

He further said that the assessment of the target population of 450 wolves is based on an overview of what researchers believe.

“The situation for the wolves is serious but can be improved,” Liljelund added.

Environment minister Andreas Carlgren declined to comment on the proposal on Monday.

“I don’t want to take a position now. We should first listen to all the points of view. I am presuming that we will have an increased wolf population in Sweden, but exactly how large this will be is a question for a later date,” Carlgren said.

The Swedish Association for Hunting and Wildlife Management (Svenska Jägareförbundet) has however reacted against the proposals contained in the interim report.

The association argues that the Swedish wolf population should be as small as 150 animals.

“We can’t accept 450 wolves. It is regrettable that Liljelund now touts that figure for the final report,” said Gunnar Glöersen at the association.

“Liljelund has let ecologists and biologists set the figure, but as I see it there is nothing in the EU directive which requires it to be quantified in this way,” he said.

The WWF is however happy with a large part of the interim report.

“I would like to see more of the background to the conclusions, but generally speaking I am positively surprised,” Tom Arnbom at WWF said.

In January, the European Commission decided to open a formal infringement procedure action against Sweden for allowing a recent cull of the country’s wolf population.

It could lead to a case before the European Court of Justice, which can impose hefty fines on EU states that violate the union’s rules.

Lars-Erik Liljelund’s interim report also reviewed the status of the other three major predators in Sweden.

For the bear and the lynx, the situation is described as satisfactory. But the wolverine is, like the wolf, described as having an unfavourable conservation status.

According to Liljelund the wolverine population would need to be boosted from the current 650 animals to a stock of 850 in order to reach a genetic balance.