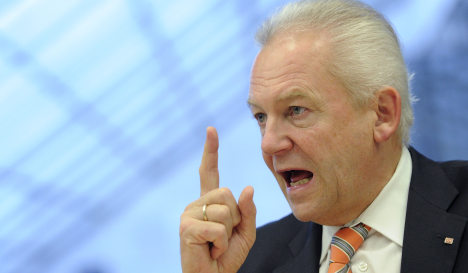 “Stuttgart 21 is happening, with 100-percent certainty,” Grube told Bild am Sonntag, addressing speculation that the defeat of Baden-Württemberg’s centre-right coalition in March elections could put the project’s future in question.

The environmentalist Greens have joined forces with the Social Democrats after the two parties took 24 percent and 23 percent of the state vote, respectively.

“We have watertight contracts with the state of Baden-Württemberg,” Grube said. “And if someone there thinks he’d like to pull out of the project, he should also tell all of the partners where we should send the bill.”

A report published last week in the Stuttgarter Zeitung said Deutsche Bahn board member Volker Kefer and Stuttgart Mayor Wolfgang Schuster of the conservative Christian Democratic Union had recently discussed by phone whether the city would be held to a financial agreement that includes penalties if the project is cancelled.

“Our claims would run at about €1.5 billion,” Grube told Bild am Sonntag. “In the event of a withdrawal, we would have to recoup our money. As the chief executive officer of a corporation, I am simply bound to do so.”

The project must undergo a “stress test,” but Grube said Deutsche Bahn was confident the railway station would withstand the scrutiny.

The project is unpopular among many residents in Baden-Württemberg’s state capital, and has prompted a number of large-scale demonstrations.