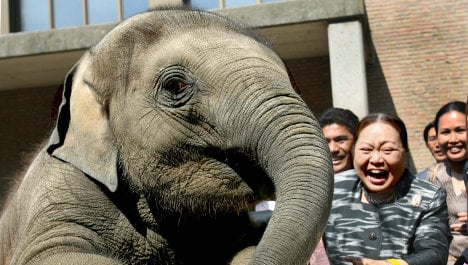 Zookeeper Rüdiger Pankow found the elephant’s body about 7 am Tuesday morning, according to the daily Berliner Kurier. She was most likely killed by a herpes virus.

“Once again we are mourning,” said zoo spokeswoman Claudia Bienek.

“We didn’t have a chance. Even if the virus had been discovered, the chances of curing it in the short time available would have been minimal.”

Fears have naturally arisen for the seven other elephants at the zoo, because elephant herpes can be passed via body fluids and particles that come into contact with mucus membranes. Ochs said the risk was low but it could not be ignored and the animals were being tested.

Zookeepers were particular concerned for Shaina Pali’s two-year-old sister Ko Raya whose resistance to the virus may not be as strong as that of adult elephants.

Four-year-old Knut died a little over two weeks ago. Post-mortem results released on Friday revealed he was suffering from encephalitis, swelling of the brain likely brought on by an infection. This caused him to have a seizure, fall into the pool in his enclosure and drown. His death sparked outpourings of grief.

Fans have protested against the zoo’s plan to have his body stuffed and put on display.

The zoo has lost two other elephants to herpes infections – Kiba in 1998 and his son Kiri two years later.