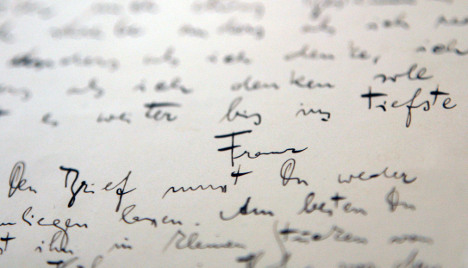 The archive, in Marbach am Neckar, is to buy the letters that the author of “The Trial” and “The Metamorphosis” wrote to his favourite sister Ottla, director Ulrich Hauff announced on Monday in Berlin.

The archive is making the purchase in partnership with the Bodleian Library in Oxford.

In addition to the 111 briefs, postcards and picture postcards written by the Prague-born author, the estate of Ottla Kafka also plans to give the two institutions 23 letters written to Franz and Ottla by their mother Julie Kafka, as well as three letters from Kafka’s lover Dora Diamant and nine letters from his close friend Robert Klopstock.

None of the parties would reveal the sale price of the letters, but the estate had originally planned to auction them on April 19 for an expected €500,000 through the Berlin manuscript trader J.A.Stargardt.

The letters Kafka wrote to his favourite sister are regarded as especially personal and intimate. Kafka wrote them during the period from September 1909 and January 1924.

Hauff hailed the purchase as an important way to keep the collection of letters out of the hands of private speculators who might later sell them individually.

Richard Ovenden, director of the Bodleian Library in Oxford, agreed it was cause for celebration.

“It shows that the pursuit of academic co-operation can extend beyond national borders,” he said.

The letters would be stored at the archive in Marbach, though the British partner will be able to borrow and study the collection. An exhibition of the documents will be held in Marbach at the end of May, with an exhibition in Oxford to follow.

Kafka, regarded as one of the most influential authors of the 20th century, was a German-speaking Jew born in 1883 in Prague, which was then part of the Austro-Hungarian Empire. He died of tuberculosis in 1924, before which he famously asked his friend Max Brod to burn his writings – a request Brod disobeyed.

Ottla Kafka was killed by the Nazis in Auschwitz-Birkenau death camp in 1943.