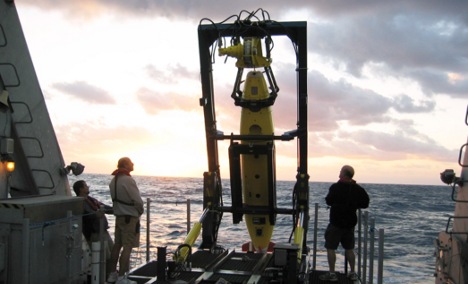 The first three searches for remnants of flight 447 failed, but the fourth attempt has proved successful, renewing hope that some of the 228 victims of the June 1, 2009 accident could still be identified.

The operation led by salvage vessel “Alucia” has found fuselage and engine parts, as well as bodies, French Environment Minister Nathalie Kosciusko-Morizet said in a radio interview, adding that “identification is possible.”

Meanwhile Transport Minister Thierry Mariani said families of the victims who were killed on the trip from Rio to Paris would receive more details at a meeting late this week, news agency Reuters reported.

The discovery by France’s Bureau of Investigation and Analysis (BEA) has renewed hopes that the plane’s black boxes could be found, offering an explanation to the mysterious crash.

The search, which covered some 10,000 square kilometres of the ocean floor, was aided by the unmanned submarine AUV ABYSS, a REMUS 6000 on loan from the Leibniz Institute of Marine Sciences in Kiel (IFM-GEOMAR). Three other REMUS 6000 submarines were used by the Alucia’s operator, the Massachusetts-based Woods Hole Oceanographic Institute.

Photographs taken from up to 4,000 metres deep show that the wreckage of the Airbus A330 has been well-preserved, reports said.

One of just a handful in the world, the four-metre long, one-tonne machine can dive as deep as 6,000 metres and undertake deep water missions for up to 24 hours. It uses sensitive sonar sensors to find items on the ocean floor.

“With this device we can recognize objects the size of a shoe box – no other system is more accurate at these depths,” head of the IFM-GEOMAR team Dr. Klas Lackschewitz said in a statement released as the mission began last week.