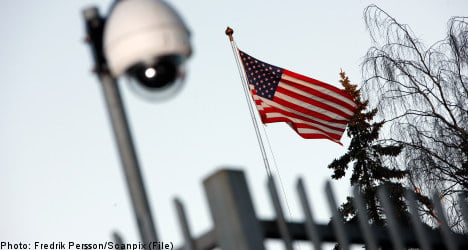 Chief Public Prosecutor Tomas Lindstrand launched a probe in November into whether the US embassy’s Surveillance Detection Unit (SDU) may have engaged in illegal intelligence gathering.

According to the embassy, the SDU is focused on uncovering surveillance directed against the embassy.

On Monday, Lindstrand announced he was dropping the preliminary investigation because allegations of unlawful intelligence activities could not be substantiated and there were no grounds to suspect that a breach of professional confidentiality was committed.

In addition crimes against Sweden’s Personal Data Act (Personuppgiftslagen – PUL) “could not be investigated”.

“We’ve not been able to investigate those who work with or have worked with the SDU because their observations are considered to be part of the embassy’s archives and are inviolable,” Lindstrand told The Local, citing provisions in the Vienna Conventions.

“We’re not allowed to look at them…we can’t do anything about it.”

Lindstrand explained that, based on information he received from Swedish law enforcement and military agencies, there was nothing to indicate that activities carried out by the SDU were anything out of the ordinary.

“It looks perfectly normal if you look at the memoranda and reports,” he said.

However, Lindstrand was unable to access any information that may have been gathered by the SDU teams and entered into the US State Department’s “Security Incident Management and Analysis System” (SIMAS) database.

According to the State Department, the register can contain a wide range of personal information, including hair colour, race, height and skin colour, as well as information about people’s families and behaviours – information which, if recorded without a person’s knowledge – could constitute a crime in Sweden

“But if things like this have really been reported, I can’t say,” said Lindstrand.

He added that his office made several requests with the embassy to be allowed access to the information gathered by the SDU, but the requests were rejected.

With respect to allegations that the US embassy conducted unlawful intelligence work, Lindstrand found that the embassy failed to follow its own guidelines when it came to informing the Swedish authorities about the Surveillance Detection Programme (SDP).

“No information has been given to the appropriate authorities about the programme and the activities. Neither is there any statement from the USA that the Swedish government has been informed about and approved the programme,” Lindstrand wrote in his ruling.

While he didn’t rule out that the programme may have constituted unlawful intelligence gathering, Lindstrand pointed out that the only way to prove so definitively is to show that activities carried out by the SDP violated Swedish laws.

“If the intention of launching the SDP in Sweden was for the SDU to report information on personal circumstances to SIMAS or to some similar register, already the existence of an organization like the SDU could be sufficient to constitute a punishable offence (under Swedish law),” he wrote.

However, since he was unable to access the content stored on the SIMAS database, nor conduct unrestricted interviews with members of the US embassy’s SDU teams, Lindstrand had no choice but to close the investigation.

“We’re pleased with the results of the inquiry, which we feel show that we’ve done our best to cooperate with the Swedish authorities on this matter,” Dunnett told The Local.

He also downplayed Lindstrand’s criticism of the embassy’s efforts to inform Swedish authorities about the SDP.

“Clearly, there were some instances where the communication could have been better,” he said.

“But we’ve cooperated with the inquiry to the best of our ability and we think it clearly establishes that we acted properly and within our rights according to the Vienna Conventions.”

When the SDU came to light in November, justice minister Beatrice Ask said she was not aware of the US surveillance programme, which has been in place since 2000.

The embassy has acknowledged the programme, explaining that it had informed the Swedish authorities about its existence.

According to Lindstrand, “there is nothing left for me to do from a criminal law perspective” in terms of investigating the US embassy’s actions.

The programme is also being investigated by the Riksdag’s Constitutional Committee in order to determine what current and former cabinet ministers may have known about the US embassy’s surveillance activities.

The committee is expected to conclude its investigation sometime during the spring.