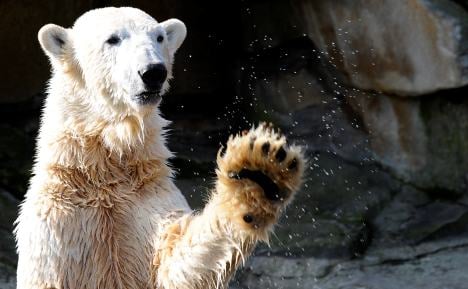 “Knut drowned following massive brain inflammation most likely caused by an infection,” said Heribert Hofer, director of the Leibniz Institute for Zoo and Wildlife Research that conducted the examination.

Knut died on March 19 aged just four years and three months after collapsing in his enclosure in front of a large number of visitors at the zoo in the German capital and plunging into the pool.

He shot to fame as an photogenic cub after being abandoned by his mother and was raised by zookeepers.

His body is due to be handed over Berlin’s Natural History Museum where it will likely be part of an exhibit about climate change, museum director Ferdinand Damaschun said meanwhile.

“The animal is not going to be stuffed. Instead he will continue to exist in so-called dermoplastic” covered with his original coat, Damaschun said.

He left open, however, when Knut would go on show again.

“We will take our time,” Damaschun said.

But mourning over the superstar polar bear is slowly but surely being replaced with a growing wave of anger.

Knut’s fans are planning a demonstration this Saturday in protest at plans for his body to be put on display. Activists have been collecting signatures both on the internet and on the streets, and an online condolence book provided by the zoo is full of angry missives.

“Knut cannot be stuffed. When are you going to get the message!,” reads one from Michael S. “Leave him alone for once!! You cannot be serious. Let Knut rest in peace !!!”

“We’re not in the 19th century any more,” Doris Webb, who collected more than 30,000 signatures in 2009 for a petition to prevent Knut going to another zoo, as was feared at the time, told the Berliner Zeitung daily.

An open letter to zoo director Bernhard Blaszkiewitz says: “Nobody wants to look at a stiff, dead Knut.”

According to a survey of more than 2,400 people published in the Berlin tabloid BZ, 73 percent of those questioned are opposed to him being put on show at the museum.

Campaigners accuse the zoo, which has already made millions of euros from Knut in merchandising and extra entrance fees, of wanting to milk him for even more.

Instead, they say, Knut should be cremated.