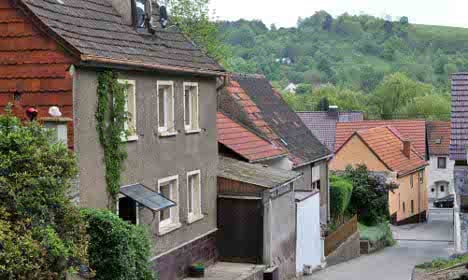 The house where the accident occurred. Photo: DPA

The 45-year-old woman, who was also the child’s great aunt, was found to have caused girl’s death through negligence in her failure to control the pets, the Nordhausen court said.

The child’s great grandmother, who had brought her to visit the woman in late May 2010, had already faced a failed case against her for responsibility in the tragic death. The 71-year-old allegedly put the child in danger with by not watching her closely enough before the four American Staffordshire terriers suddenly attacked after sneaking into the house unnoticed through a dog door.

The elderly woman also suffered severe bites to her face and arms in the attack.

But it was the defendant in Thursday’s proceedings who was responsible for the child’s death because she was not in control of the powerful dogs, traditionally bred for fighting, Judge Gerhild Grote said.

“Those who sow danger must ensure that no one is injured or killed by it,” she said, adding that “dogs become weapons” in certain situations.

The woman had taken inadequate precautions to prevent such an attack on her property in Oldisleben-Sachsenburg, the court ruled.

“The accused didn’t want what happened,” the verdict read, but she should have been aware of the risks after warnings from family members, it added.

State prosecutor Gert Störmer accused the defendant of failing to properly raise and care for the dogs, calling the pack a “ticking time bomb.”

But her lawyers called the child’s death a “human catastrophe,” saying their client had been overwhelmed and underestimated the potential danger posed by the dogs.

During the two-day trial family members bickered bitterly, the incident clearly having “shattered” their relationships, Judge Grote said as she read the verdict.

“Hate doesn’t lead to overcoming grief,” she told the court, adding that there was professional help available to the family.