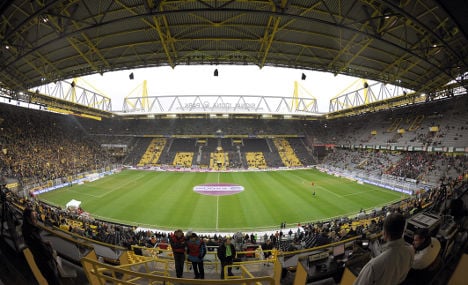 A 25-year-old German man had buried a cache of explosives and weapons, including three bombs, in the immediate vicinity of Signal Iduna Park, according to the BKA Federal Office of Criminal Investigation in Wiesbaden.

The packages were found and defused. Three more bombs were found at the man’s home in Krefeld to the west of Dortmund. He was arrested in Cologne on Tuesday.

“We can confirm there are investigations in North Rhine-Westphalia in connection with suspected explosive objects,” said a BKA spokeswoman.

The BKA said that police had been on the man’s trail since an anonymous source had established contact with the German embassy in Islamabad by email, offering information about two planned attacks in Germany by a group.

However, it appears that this email was sent by the suspect. It quickly became clear that the warnings could be the start of a blackmail attempt, particularly because a language analysis showed a close similarity to an unsolved attempted blackmail case from 2010, the BKA statement said.

And the Interior Ministry said on Thursday afternoon there were no indications the man had a terrorist background.

“The suspect apparently acted alone with a general criminal motive,” a ministry spokesman said. “There are absolutely no ties to terrorist or Islamist organizations.”

Under questioning, the man admitted being the anonymous source and to having designed the attack scenarios described in the email. He also admitted to having placed three explosives near the stadium and to having three more at his home.

During a search of his home turned up three suspicious objects and extensive written material on making chemical explosives.

“The possible connection to an attempted extortion against a business in 2010 has been confirmed during the search,” the BKA statement said.

The BKA statement stressed police believed there had been “no acute danger to the public.”