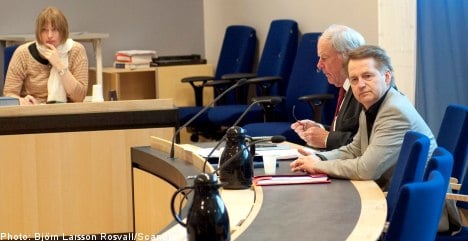 Lundgren’s own wife alerted authorities to the alleged bribe, and is scheduled to testify against her husband in the case.

The Gothenburg corruption scandal also involves the municipal housing firm Familjebostäder and the city’s sports and clubs division, as well as the relationship between construction magnate Stefan Allbäck and municipal officials.

Prosecutor Nils-Eric Schultz smiled at reporters as he arrived at the district court but declined to comment on the case. Schultz began the trial by outlining the details of the case against Lundgren, who denies having committed an offence.

Lundgren’s lawyer, Anders Munck, said his client agreed he had received the bricks but insisted that he believed he had paid for them. Lundgren claimed to have paid 33,000 kronor to the company that delivered the bricks.

Until the bribery accusations emerged last year, Munck said his client was convinced he had covered the cost of the building materials.

“It was only in later years that he understood that he had paid for the transport of the bricks,” said Munck.

Lundgren told the court about his plans to build a house. He had decided to oversee the project himself and was in touch with a number of suppliers.

He said he had been looking for materials that needed no maintenance and decided to opt for Weinerberger’s bricks. He explained that Weinerberg had initiated the contact, having heard about his project from an architect.

“We agreed on a price, which I didn’t remember how high it was, but I thought it was a very good price,” he said.

Lundgren told Schulz he had not had any previous dealings with the company but did not consider that he was taking a risk working with them.

He agreed that the price he paid seemed very good, but said he did not feel he was given favourable treatment because of his position as head of Poseidon.

Bo Wenner, who worked for Weinerberger in 2003 when Lundgren received the delivery of bricks, told the court that the company had given Poseidon chief the bricks in the hope that he would help them out in the future.

“The brick market has dipped way down in recent years,” said Wenner. “We have had to resort to odd methods in order to sell, including for example special reduction to get onto the building market.

“We gave him the bricks in in exchange for him covering the transportation cost.”