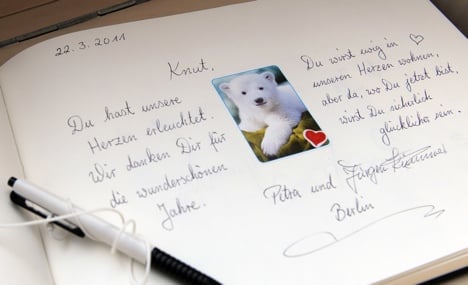 Epilepsy expert Christian Elger from the University of Bonn told news magazine Focus that Knut’s “typical turning movements” and his shaking leg – both seen in an internet video of the last seconds of the bear’s life – were clear signs of an epileptic seizure.

The zoo refused to comment on the speculations, and said the final results of its own autopsy would be delivered on Wednesday or Thursday.

Filmed by one of hundreds of visitors who witnessed the incident, the video shows Knut losing his balance and falling into the pool in his enclosure. It could be disturbing to some people.

“I’ve seen similar symptoms in laboratory rats,” said Elger. The professor speculated that the seizure disabled Knut’s reflexes, which would have saved him from drowning.

The Berlin Zoo said in a statement Tuesday that a preliminary necropsy revealed “significant changes to the brain, which could be seen as the reason for the sudden death of the polar bear.”

The zoo has come under fire in the wake of Knut’s death, both for its treatment of the animal and the decision to have Knut stuffed. A death notice published by Knut fans in Saturday’s edition of Berlin’s Der Tagesspiegel newspaper, accused the zoo director of doing little to ensure his well-being.

Addressing the dead bear directly, the fans wrote, “You deserved the life of a polar prince. Instead you were fobbed off with the cheapest measures.” The zoo is accused of not giving Knut enough toys to play with and for allowing him to be bullied by the three female bears he shared his enclosure with.

Zoo director Bernhard Blaszkiewitz had little sympathy with such notions, and called for more perspective. “I liked Knut as well,” he said in an interview with the weekly Frankfurter Allgemeine Sonntagszeitung. “But more than 20,000 people just died in Japan, and there’s a war in North Africa.”

He said the “humanization” of Knut had been “extreme” even while he was alive. “I’ve worked in zoos for 37 years, and I’ve never seen such attention paid to one animal.”