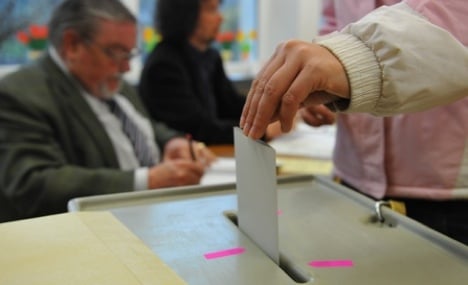 Merkel’s conservatives have ruled Baden-Württemberg in southwestern Germany since 1953, but anger over her nuclear power policy as well as decisions on Libya and the euro have led voters to turn their backs on the party in droves.

Beyond a crushing blow to morale in Berlin, a defeat could make it even harder for Merkel to pass legislation in the Bundesrat upper house of parliament and prompt fresh calls for her to shore up her rightist credentials.

The survey by the independent TNS Emnid institute showed the opposition with 48 percent of the vote in a state that is home to industrial giants Daimler and Porsche, versus 43 percent for state premier Stefan Mappus’s ruling alliance.

This would mark a debacle for Merkel, 56, after drubbings in North Rhine-Westphalia in May and Hamburg in February, with three more state polls to come this year.

“Losing power in Baden-Württemberg would be the worst defeat yet for Merkel as party leader,” wrote the weekly Die Zeit.

Calling Japan’s crisis with its Fukushima plant a “turning point”, Merkel suspended for three months an earlier decision to extend the lifetime of Germany’s nuclear reactors, four of which are based in Baden-Württemberg.

She also temporarily shut off the seven oldest reactors pending a safety review.

Although nuclear power is unpopular in Germany, voters saw Merkel’s zigzagging as an electoral ploy, according to polls, and it has cost her support while boosting the anti-nuclear Green party.

“The CDU thought that a state which is doing so well could not be lost, but Mappus might just manage it,” the centre-left daily Süddeutsche Zeitung said. “People’s fear of nuclear power is at the core of Mappus’ fear of defeat.”

Also up for grabs Sunday is Rhineland-Palatinate, where the Social Democrats risk ceding their absolute majority and may form a coalition with the Greens.

The FDP, meanwhile, could fail to clear the five-percent hurdle for representation.

Adding to the pressure, tens of thousands of Germans hit the streets Saturday in four major cities to protest the government’s nuclear policy.

In addition to the nuclear climb-down, many conservatives have frowned on Berlin’s abstention from a UN Security Council vote to create a no-fly zone in Libya, in a historic break with Western allies.

Critics saw the move as another sign of pandering, this time to a strong pacifist streak in the German electorate.

“German foreign policy has failed, with no map, no compass and or captain,” said Wolfgang Münchau of the specialist website Eurointelligence.

Finally the media savaged Merkel for agreeing at an EU summit Thursday to commit to a giant new eurozone rescue fund at a Brussels summit.

“The old promise that ‘we won’t pay for the others’ has been broken once again,” the top-selling Bild newspaper wrote.

Some 10.8 million people are eligible to vote in the two states Sunday. Preliminary results are due soon after the polls close at 6pm.