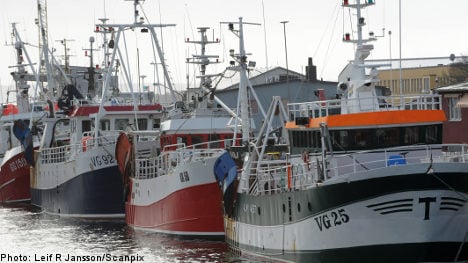 In accordance with a 2006 EU directive, Sweden has had an action plan to reach the goal of a balanced ocean environment.

“Six years have passed and Sweden hasn’t even properly started the long process of regulating fishing. There are some pilot projects launched and there is an inquiry into the implementation, but according to the EU directive that should have been done a long time ago,“ Jan Isakson told the Local.

But in a debate article in the Dagens Nyheter daily on Monday, Jan Isakson and Therese Jacobson of Greenpeace wrote that the government isn’t living up to the environmental promises they have made.

And since December 2010, when time ran out to protect the so-called ‘Natura 2000’ areas in the Kattegatt sound between Sweden and Denmark, the country is in breach of EU law, the pair argued.

According to the EU directive, member states must be in a position to guarantee the protection of environment and sea-life within six years of acquiring protected status.

But according to Isakson and Jacobson, the government hasn’t even tried to regulate against destructive fishing. And on a local level, county councils seem to be groping in the dark when dealing with protected areas.

According to Isakson and Jacobson, the government needs to find funds to identify areas in need of protection and regulate destructive fishing.

And they need to pursue the question of the effect on fishing on the environment in the EU while dealing with reforms in fishing politics.

“And there should be a total ban on fishing in the protected areas until the inquiry is over, “ Isakson said.

According to Isakson, Sweden is already breaking EU law and the question now is if the European commission will review the matter.

If a member state doesn’t comply with a EU directive, the commission may initiate legal action against them in the European Court of Justice.

In 2010 the Helsinki Commission (Baltic Marine Environment Protection Commission) showed that the three main threats against the Baltic ocean were eutrophication, over fishing and loss of biological diversity.

Only 5 percent of Swedish seas are protected today, compared to 13 percent of the land.