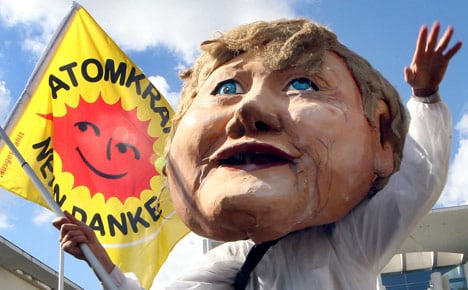 The survey, conducted by the Emnid polling institute and published in the magazine Focus on Saturday, found that 48 percent of those asked believed Merkel’s management during Japan’s nuclear disaster had been poor.

Only 40 percent said she was doing a good job in light of the situation. Twelve percent did not have an opinion.

The crisis has not thrown a good light on German Environment Minister Norbert Röttgen either. The survey found that 47 percent are dissatisfied with his performance while 32 percent say it is satisfactory.

On Saturday, Merkel called for common safety standards at all of Europe’s nuclear plants.

“We have standardized all sorts of things in the European Union – from the size of apples to the shape of bananas – and we could also really talk about common safety measures for all the nuclear centres in Europe,” Merkel said in her weekly podcast.

She said she would put this on the table at the European Council meeting in Brussels late next week.

Also on Saturday, Merkel is meeting with world leaders in Paris to discuss the situation in Libya. Others at the meeting include French President Nicolas Sarkozy, UN Secretary-General Ban Ki-moon, US Secretary of State Hillary Clinton, UK Prime Minister David Cameron and the leaders of Spain, Italy, Portugal and Belgium, among others.

At the top of the agenda will be the resolution by the UN Security Council over the enforcement of a no-fly zone over Libya. Germany abstained for voting on the resolution on Thursday in New York and has said it will not participate militarily.