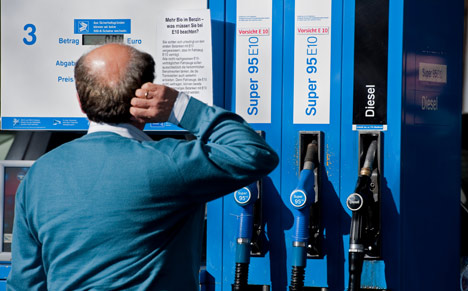 The survey, carried out by the German automobile club ADAC and published in the magazine Der Spiegel, found that 40 percent of drivers do not believe that the fuel, with its 10 percent bioethanol content, will help the environment.

Some 36 percent said they were concerned the gas might damage their car engines and just under 10 percent fear that the fuel blend will lower fuel efficiency.

The ongoing unpopularity of E10 has depleted stocks of traditional grades as drivers decide to fill up with what they know and trust.

The German government has come under intense criticism for its handling of the fuel’s introduction, with many saying it failed to inform the public which cars could safely drive on the new gasoline.

While the fuel is suitable for most cars, gas efficiency does fall slightly.

Two weeks ago, a “fuel summit” between the government and oil companies sought to find ways to address the problems with E10’s acceptance, including launching an information campaign clearly laying out which cars could run on the new fuel.

Oil company Esso has decided to promote E10 by lowering the price at selected filling stations, according to Saturday’s edition of the newspaper Bild.

“We committed ourselves at the fuel summit to doing all we could to increase the acceptance of E10, but unfortunately we haven’t been successful with our educational efforts,” company spokesman Gabriele Radke told the newspaper.