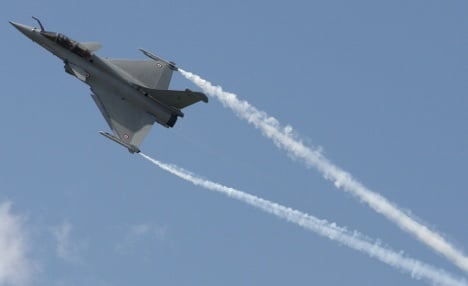 German Foreign Minister Guido Westerwelle said Berlin could not vote for the resolution because it would not commit troops to any intervention. However, Chancellor Angela Merkel said Germany generally backed the Security Council’s aims.

Riecke, an expert on Transatlantic Relations at the DGAP, spoke with Amrit Naresh about the foreign policy repercussions of the abstention and what it means for Germany’s credibility with its international allies.

Germany recently joined the UN Security Council for a two-year term. Berlin has made clear its desire to play a more active role in global security – but has Germany isolated itself by abstaining from voting on a major resolution like the Libyan no-fly zone?

I think that NATO itself is not really united, so to be isolated within NATO is probably saying too much. The abstention didn’t come as a real surprise. Westerwelle had made clear rather early on that, although he dislikes Qaddafi, wants him to go – that’s the government’s position – he also did not like the necessity of military action to achieve that. That’s reasonable, because none of these instruments, the no-fly zone or others, is a silver bullet. And of course there is no clear agenda, what expectations there would be for a Libya post-Qaddafi. So one would rather have that mandate, and the ensuing military action – not only in air, I assume – with a clear agenda of what one wants from Qaddafi. So when Merkel says it’s not really thought through, there’s something to that.

But this has been a very difficult decision. I, myself, would rather have been in favour of an intervention, and would like to see Germany play a role, even if it’s a minor role, in joint units like the AWACS [Airborne Warning and Control System] or something, but I think Westerwelle was rather principled in that. And he didn’t want to risk sending Germans into a war that he wasn’t convinced of. Did we isolate ourselves? In a way, yes. Did we damage our room to manoeuvre? Could be. We have lost a little bit of credibility in the Security Council, I believe, with this cautiousness.

Do you buy into Westerwelle’s scepticism based on the inherent “risks and dangers” of imposing a no-fly zone?

Yes, it’s not as if this is a bogus argument against some military operation that one doesn’t want domestically. I think there are good reasons to be sceptical. It’s a complex situation on the ground. There is, of course, the risk of an escalation that would draw allied forces into direct combat, and many read this resolution as being open enough to allow for that kind of measure. And since it’s all about protecting the civilian population, it will be very easy to argue for extending operations if Qaddafi doesn’t comply. Also Qaddafi knows this. This is a scenario that he doesn’t like, and this is why, now, he has already announced a ceasefire and an openness to dialogue. So he complied pretty quickly – but you don’t know how far, and you really don’t know what the inner workings of the Qaddafi regime are. But I think the decision of Westerwelle, in that sense, was driven mostly by concerns about what could be achieved by military means. This is, of course, honourable, because the Germans know that the price might be high.

Westerwelle has said he understands why Germany’s allies are taking action, and he has also demanded that Qaddafi step down. But by abstaining, do his words lose some of their clout? Does he risk giving the impression that he fails to back up words with actions?

Yes, I think that is the problem. He is demanding that Qaddafi should leave office, and then threatening with measures that do not really threaten him, that he could survive easily. The alternative might be loss of life for Qaddafi, or loss of political position. I think the sanctions that Germany is working for are not tough enough to hurt Qaddafi enough for him to leave office, I would assume.

Westerwelle seems to be walking a political tightrope. He doesn’t want to seem hawkish, yet he says he fundamentally opposes Qaddafi’s regime. Do you think the German public’s weariness of the war in Afghanistan has made the government politically unwilling to enter the Libyan conflict?

I have changed my opinion on that during the course of the day. I would have believed that the incoming elections do play a role for the government, for (Merkel’s) Christian Democrats as well as for the liberals. But people close to the liberals have told me this is not the case, especially (Westerwelle’s) Free Democrats. Although they always are very sceptical with regards to the military, they are also very supportive and idealistic when it comes to democratic movements and uprisings. I think the Germans are quite sympathetic with the opposition in Libya, because they are reminded of (East Germany’s democratic revolution in) 1989.

So it may well backfire: to say, we now want to win an election and so we keep a lid on the military rhetoric. This might backfire, if it looks like doing nothing, and the people are frustrated with the government because they want something done, and see that the other states do, and only the Germans don’t. So I don’t think this has played such a big role, especially not for Westerwelle. Maybe for Merkel.

Will Germany’s decision to abstain – and thereby align itself with countries like China, Russia, India and Brazil – affect its credibility with vital allies like the United States, Britain and France, who all voted in favour of the resolution?

I don’t really sign onto that, that we side with China and Russia. I mean, China and Russia have no real interest in that. People abstain for different reasons; we did not oppose it. I think you are right that the Americans and especially the French will be frustrated by the German cautiousness, and this is one of the prices we have to pay. We have to mend the relationship with these countries, when they find themselves bogged down somewhere in [Libya].

One way of doing this would be to see when things go well, and imagine a scenario in which Qaddafi leaves office and goes into exile and a transition comes into being. It would be a very good role for Germany to do whatever it could to support that transformation with civilian means, even if it’s a little bit costly, to show that we do care about what happens in Libya – we simply didn’t believe in military means. If it goes wrong, in a sense that maybe the allies get into an escalation and find themselves in a year-long civil war mission, it would not suit Germany well to lift up a finger and say, ah, I told you so. So we have to take care not to be the know-it-all with the allies, but rather try to step up engagement elsewhere.

I think Westerwelle has proposed even to have more engagement in AWACS and in Afghanistan, to help the allies elsewhere and to increase their room of manoeuvring in Libya. But I think we will have some problems with regard to the French and the Americans. We had just mended our relations after the clashes over Afghanistan policy in 2007 and 2008. That was a very difficult phase, and it had just turned around again and the Germans were again part of the Western community, and we stopped that.

Is this blow to German-French relations on the same scale as the conflict between the two allies over policy in Afghanistan?

Not quite, I think. It’s not as big. And things could turn out differently. We could be lucky and find a quick solution in Libya, or an escalation could be avoided because Qaddafi is complying, I don’t know. How long it will take, and how severe these problems will be, it’s too early to say right now.