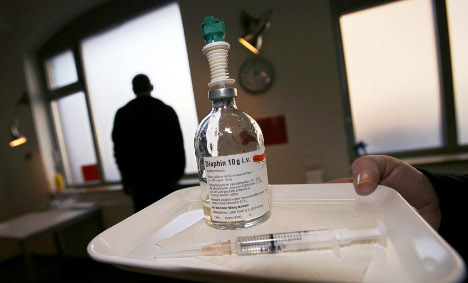 Traces of illegal drugs were found on hair samples for 14 out of 15 children tested in the last several months, spokeswoman Petra Kodré said, describing the numbers as “alarming.”

The children were removed from their parents’ custody.

The situation prompted to officials to test another 30 children aged one to three-years-old, along with their siblings, she said.

Results of these tests – the first systematic analysis of its kind – are expected in about one month, Kodré said.

Younger children seem to be in particular danger of this kind of abuse, because their parents are most likely to be overwhelmed and may be using drugs to calm the tots.

Should the results of the most recent analysis mirror those of the first 15, it would turn drug therapy “upside down” across the nation, she said.

Until now officials have assumed that parents receiving methadone therapy – the medically controlled use of a replacement drug for heroin and other opiates – were otherwise drug-free.

Addicts in such programmes who wish to maintain custody of their children must sign a legal agreement to abstain from drugs, a promise monitored by social workers.

In Bremen there are currently about 90 children whose parents are undergoing drug replacement therapy.