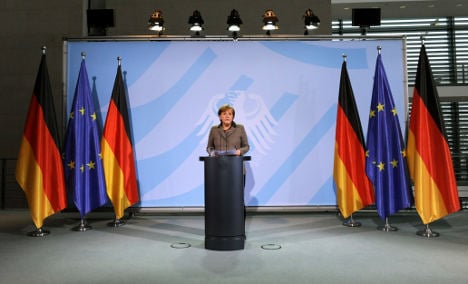 “There are already some encouraging reports that (Muammar) Qaddafi is reacting to the (UN) resolution,” Merkel told reporters in a short statement.

Meeting on Thursday, the UN Security Council voted to permit “all necessary measures” to establish a no-fly zone, protect civilian areas and impose a ceasefire on Qaddafi’s military. Germany, parting with its closest allies, abstained on the resolution.

“The world community however will look very closely to make sure we are not dealing here with diversionary tactics or tricks,” the chancellor added. “We want a ceasefire and a lasting ceasefire so that Qaddafi’s war against his own people comes to a swift end.”

Western and Arab nations were gearing up to launch air strikes after the UN approved action to stop Qaddafi from crushing the insurgency.

The UN Security Council resolution 1973 “demands the immediate establishment of a ceasefire and a complete end to violence and all attacks against, and abuses of, civilians.”

Kussa said Libya, as a member of the United Nations, was “obliged to accept the UN Security Council’s resolutions.”

But Merkel was also forced on Friday to defend her administration’s decision not to back the resolution.

“As everyone know, Germany will not take part in the military intervention and only because of this … we decided to abstain. We unreservedly share the aim of this resolution,” Merkel said.

However, she added: “Our abstention should not be confused with neutrality.”

“I can assure you that we had respect and understanding for our position and our decision even from those that voted in favour” of the resolution permitting the no-fly zone, Westerwelle said.

He added: “I have great understanding for the motives of those that voted for the resolution and the military action. But after weighing up the risks… we came to the conclusion that German soldiers would not contribute to the intervention in Libya and therefore we decided to abstain for this reason, and for other reasons.”

Speaking later in parliament, Westerwelle warned that any military intervention would result in civilian deaths.

“There is no so-called surgical strike. Any military intervention will cause civilian casualties,” he said.

Referring explicitly to Iraq and Afghanistan, he called on the international community to “learn the lessons from recent history.”

Five countries on the 15-strong council abstained, including permanent members China and Russia, who did not use their veto power. India and Brazil also abstained in addition to Germany.

“The decision was not taken lightly,” Westerwelle told deputies. “We are not in a position to do away with dictators everywhere in the world. But we are in a position to raise our voice and make it clear to people that we are on their side,” he said.

Responding to accusations that Germany was isolated within the European Union and the NATO alliance with its actions, Westerwelle said the decision to deploy troops was one the country alone could take.