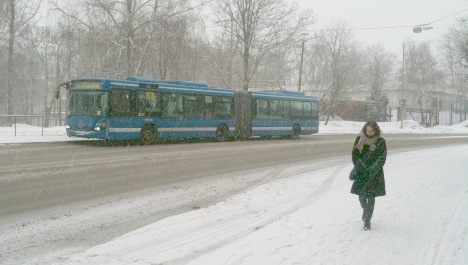 Sweden’s meteorological agency SMHI has issued a class one weather warning (on an ascending scale of three) for the snowfalls which are forecast to be intensive during the afternoon and evening, bringing around 10-15 centimetres of snow.

“The area of snowfall which has led to a significant amount of new snow in southern Sweden and is now on its way up over Norrland, will tomorrow afternoon move off towards Finland,” Emma Grönkvist at SMHI said in a statement on Friday.

A major traffic accident occurred on road 70 between Säter and Borlänge in central Sweden at Friday lunchtime. A total of fourteen vehicles were involved in the accident which blocked traffic, although no injuries were reported.

The accident was one of over ten reported in area on Friday morning as the snowfalls caused treacherous conditions on the roads in many areas.

But despite the wintry interval on Friday, SMHI assured that spring is in fact in the air in most parts of southern Sweden with the official definition – average daily temperatures above zero for seven consecutive days – now met as far north as Stockholm.

The warmer temperatures in south-eastern Sweden however brought problems of another kind as the Öresund bridge was forced to close to road traffic for several hours on Friday due to the risk of falling ice from suspension cables.

Train services continued to run as normal and the road link was reopened at around 3.30pm.

Forecasts for the weekend are more in tune with the new season than the old, with sunny weather and warmer temperatures promised for Stockholm and many areas of southern Sweden.

The Friday snowfalls will however mean that snow drifts will remain until well into next week despite the prevailing mid-March thaw.