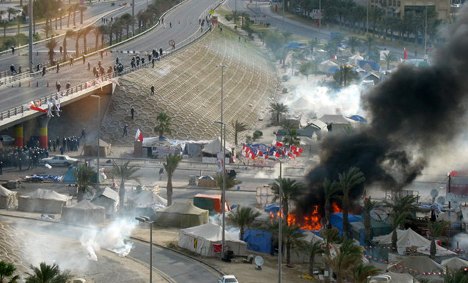 “We call on all Germans to leave the region of Tokyo and Yokohama via Osaka,” Foreign Ministry spokesman Andreas Peschke told a regular government briefing.

The Fukushima plant, in the north of the country, has been hit by a series of explosions after Friday’s 9.0-magnitude earthquake and tsunami knocked out vital systems cooling the reactors.

Radiation levels in Tokyo’s vast urban sprawl of 30 million people have see-sawed without ever reaching harmful levels, according to the Japanese government.

But the government has warned people living up to 10 kilometres (six miles) beyond a 20-kilometre exclusion zone around the Fukushima plant to stay indoors. More than 200,000 people have already been evacuated from the zone.

Meanwhile the Foreign Ministry also advised on Wednesday that German citizens leave the Middle Eastern nation of Bahrain, as the king there declared martial law and authorities cracked down on anti-government demonstrations.

The ministry has watched the increasingly violent developments on the island nation in the Persian Gulf with growing concern, a spokeswoman said, adding that declaring a state of emergency will not solve problems.

Before the call to evacuate the German embassy had told some 250 Germans living there not to leave their homes and to prepare for departure.

According to broadcaster Al Jazeera, at least two people were killed and hundreds injured Wednesday when security forces drove pro-democracy protesters out of their main gathering area, the Pearl Roundabout in the capital city Manama.

Troops from neighbouring Saudi Arabia have been called in to help put down the anti-government movement, and it remained unclear whether intimidated opposition groups would stage further demonstrations.