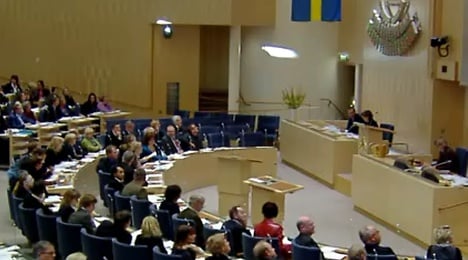 Mats Odell, the chair of the economic affairs committee, launched a final attempt to persuade the opposition to come around to the government line in general, and specifically that selling off a small part of Vattenfall would be prudent in order to raise money for sorely needed investments.

“We would never consider losing control of Vattenfall,” Odell said when he opened the debate in parliament on Wednesday.

Odell continued to argue that there really is no reason for the state to own companies in competitive markets where private companies operate.

But the minister’s plea fell on deaf ears with the four opposition parties winning by by a margin of 172 to 170, putting a stop to sell offs which would have netted the taxpayer tens of billions of kronor.

Odell meanwhile defended state ownership of “natural monopolies” such as the alcohol retailer Systembolaget, and perhaps mining firm LKAB, as the business requires major decisions such as moving a significant part of the northern Swedish town of Kiruna.

The Riksdag vote on state-owned company sales is the most significant to date which the minority Alliance government has lost. It is a prestige issue for the government, whose goal is to sell assets for a total of 200 billion kronor ($31 billion) during the term of office.

The sell off plans include stakes held in firms such as the Nordea bank, airline SAS, telecom firm TeliaSonera, the postal service Posten and SBAB bank. Wednesday’s vote in parliament concerned the stakes in SBAB, Posten and TeliaSonera.

Parliament has previously authorized the government to reduce state ownership in the three companies, but the four opposition parties have now voted to revoke the decision.

Furthermore the four parties argued that Vattenfall should remain state-owned. The Government has previously indicated a willingness to sell off some of its stake.

Financial markets minister Peter Norman chose to follow the setback in parliament from the background, declining to join the economic affairs committee debate, where the sale of state companies was taken up.

According to Norman’s press secretary, the minister has a packed schedule, but he also noted that the debate was for the members of parliament.

Mats Odell, Norman’s predecessor as minister with responsibility for selling state companies, said in the course of the debate that he could not understand why the Green Party had joined forces with the Sweden Democrats to halt the sales.

“The Sweden Democrats are driven by fear of foreign ownership, but for such an export-dependent country like Sweden, this comes across as a narrow-minded and outdated policy.”

Swedish state finances are already in surplus, so from a financial point of view the sale of shares in SBAB, TeliaSonera, Sweden Post and Vattenfall is hardly necessary.

Some economic commentators are in fact of the opinion that the national debt is in danger of being too low.

Olle Holmgren at SEB bank is among them, arguing that it would lead to fewer government bonds in circulationreducing trade and adversely affect pricing.

“Swedish bonds are in demand by the pensions industry,” Olle Holmgren said.