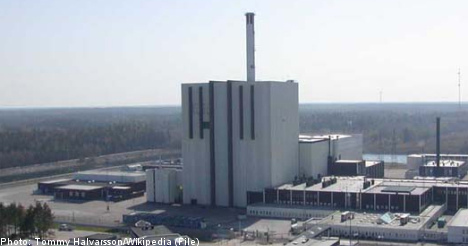 Following the Three Mile Island nuclear accident in the United States, Sweden held a public referendum on the future of nuclear power which led to a Riksdag decision to halt further development of nuclear power plants and phase out nuclear power by 2010.

In 2009, however, the centre-right Alliance government announced it was reversing the phase-out in response to concerns about climate change. And in July 2010, the Riksdag voted to replace aging nuclear reactors at the three existing plants.

Each site has been plagued by safety breaches, with the most recent serious incident occurring in July 2006 at Forsmark when two backup generators failed to start following a loss of power at the plant.

Frigyes Reisch, an associate professor at the Department for Nuclear Power Safety at the Royal Institute of Technology (KTH), is a leading expert on nuclear safety.

He has worked for the International Atomic Energy Association and at the Swedish Nuclear Power Inspectorate, SKI, for 27 years.

On Tuesday, he answered a few questions about how the situation in Japan may impact the nuclear energy development in Sweden.

Do you think people in Sweden should be concerned with nuclear power?

Yes. I think so. The problem is that you always get surprises, Three Mile Island and so on. And now again a surprise. No one in the world would have expected this.

Could what happened in Japan occur in Sweden?

I hope not. It can happen in one reactor, but I think even if a catastrophe did happen in Sweden it would be handled more effectively.

Swedish Foreign Minister Carl Bildt said he could say with certainty that the same situation could not occur in Sweden, partly because there are no tsunamis and earthquakes. Do you agree?

Unexpected things can happen, like at the Forsmark nuclear power plant, when the power disappeared in 2006. But the people in the control room fixed that in 20 minutes.

What effect will this have on the construction of new nuclear power plants in Sweden?

More questions will be asked and it will take longer time and more discussions before they arrive to a conclusion to build or not.

Do you still support nuclear power?

I still support nuclear power, but I want to take it easy.

I’m not happy about the increase in Sweden’s nuclear power output. To increase power in a nuclear reactor, you have to increase the fuel temperature. The higher the fuel temperature the nearer you come to the melting point. So the margin to melting is diminished and we are losing the safety margins against unexpected events.

They calculate a thousand scenarios, but the 1,001st scenario can occur when you don’t expect and then it’s nice to have extra safety margins. No one can guarantee that the one scenario comes that we didn’t account for.

This started 20 yeas ago when there were 12 nuclear reactors in Sweden. Then two reactors were closed so there were ten reactors producing the same amount of energy as 12 had been producing. This has continued and continued. They’ve recognized that it’s very easy to increase power and get more profit without enormous investments like a new power plant.

Money, it is a very minor investment to get a lot of energy — a lot of megawatts for a minimal investment.

But change is coming to the village, with the plant facing imminent closure under Germany’s energy transition policy.

Former village mayor Wolfgang Mayer’s house has direct views of the imposing complex with its two 160-metre cooling towers — taller than the spires of Cologne Cathedral.

The plant still produces 10 billion kWh of power per year, though parts of it have already been shut down — enough to provide the entire Munich metropolitan region with electricity.

The power station will be decommissioned on December 31, 2021, along with two other facilities in northern Germany.

By the end of 2022, Germany will have achieved its goal of completely phasing out nuclear power, set by Chancellor Angela Merkel on May 30, 2011, in the wake of the Fukushima disaster.

The plan represented a dramatic change of course by Merkel’s ruling conservatives, who just a few months earlier had agreed to extend the lifespan of Germany’s oldest power stations.

But it was met with widespread public support in a country with a powerful anti-nuclear movement, fuelled first by fears of a Cold War conflict and then by disasters such as Chernobyl.

In Gundremmingen, however, the decision has been a tough pill to swallow.

The nuclear power station has been “as much a part of the village as the church” and it feels as though “something is dying”, said Gerlinde Hutter, owner of a local guest house.

According to Meyer, it will take at least 50 years to remove all radioactive material from the site after the plant has been decommissioned.
The German government is still looking for a long-term storage site for the country’s residual nuclear waste.

Gundremmingen is not the only German village facing big changes as the country strives to implement its energy transition strategy.

Renewables have seen a spectacular rise since 2011 and in 2020 made up more than 50 percent of Germany’s energy mix for the first time, according to the Fraunhofer research institute — compared with less than 25 percent ten years ago.

The declining importance of nuclear power (12.5 percent in 2020) “has been compensated for by the expansion of renewable energies”, Claudia Kemfert, an energy expert at the DIW economic research institute, told AFP.

Nuclear power stations have therefore not been replaced by coal, though the fossil fuel does still represent almost a quarter of the electricity mix.

In fact, the phase-out of nuclear energy has been joined by another plan, announced in 2019, to close all of Germany’s coal-fired power stations by 2038.

This presents a particular challenge for Germany, which remains the world’s leading producer of lignite.

Mining for the brown coal, which is highly polluting, continues to lead to the destruction of villages in the west of the country in order to expand huge open-cast mines.

If Germany is to free itself from lignite, renewables such as wind, solar, biomass and hydropower will have to make up 65 percent of the energy mix by 2030.

Yet the country, which has long been at the forefront of wind energy in Europe, installed only 1.65 gigawatts (GW) of wind farms last year — the lowest level in a decade, according to the WindEurope advocacy group.

To meet the government’s targets, Germany would have to add 9.8 GW of solar and 5.9 GW of onshore wind annually, according to Kemfert.

But the development of new areas for wind or photovoltaic energy production is complex, with plans often coming up against resistance from local residents and the risk of damage to the landscape.

And unless storage and distribution can be improved via so-called virtual power plants, these new forms of energy do not have the same stability as thermal or nuclear power.

To secure its supply, Germany could therefore be tempted to build more gas-fired power stations.

But this would risk reinforcing its dependence on Russia, as illustrated by the controversy surrounding the construction of the Nord Stream 2 gas pipeline.

A gas-fired power station is already in the works for the town of Leipheim, just around the corner from Gundremmingen.