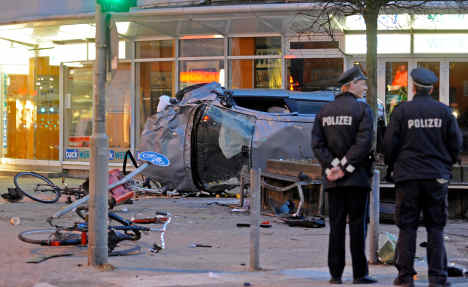 Three of the victims died at the scene, including two women aged 60 and 65, as well as a 65-year-old man. Another man died in the hospital.

“The driver who caused the accident sustained minor injuries,” a police spokesman said. The two passengers in the other car, which the 38-year-old driver apparently hit after running a red light, also had minor injuries.

An expert visited the site of the crash on Saturday evening to determine the speed at which both cars were travelling. The intersection in Hamburg was blocked off for several hours after the collision.

The pedestrians were standing in front of a bakery at the corner of Eppendorfer Baum and Eppendorfer Landstrasse when they were hit. Six streets intersect at this crossing, which is a busy area full of restaurants and shops, according to daily Hamburger Abendblatt.

“I was watching football and thought a house had collapsed or that something had exploded,” resident Pierro Rossini told the paper. After running outside, he reported seeing several people lying on the sidewalk and hearing loud screams.

Minutes after the collision, rescue crews rushed to the scene. Witnesses said there were between 10 and 15 emergency vehicles on site, as well as a fire department vehicle.