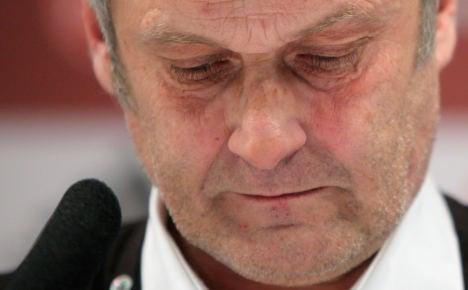 Veh said midweek he hoped to stay on until the end of the season, however the outcome of an emergency management meeting decided otherwise.

Assistant coach Michael Oenning, 45, is set to take over the helm of the eighth-placed Hamburg through the end of the season and will be assisted by former player Rodolfo Cardoso.

Meanwhile, Bayern Munich coach Louis van Gaal could not resist a dig back at the German media after his side smashed their losing streak with their hammering of Hamburg on Saturday.

the German cup and Hanover – had left Munich reeling, and van Gaal was told

last Monday his contract will be terminated at the end of the season.

After the Dutchman was effectively shown the door by Bayern, the German media poked fun at the egotistical van Gaal, but the German giants produced an impressive display to silence their critics.

Bayern roared back as Dutch winger Arjen Robben bagged a hat-trick, Germany’s Thomas Müller scored and Frenchman Franck Ribery netted twice after an own goal by Hamburg’s Heiko Westermann was later credited to him.

Van Gaal was understandably buoyed by the success with holders Inter Milan the next guests at Munich’s Allianz Arena on Tuesday in the Champions League Round of 16 second-leg clash.

“Who would have thought this, eh? Certainly not my friends from the media,

but that is football,” gloated van Gaal.