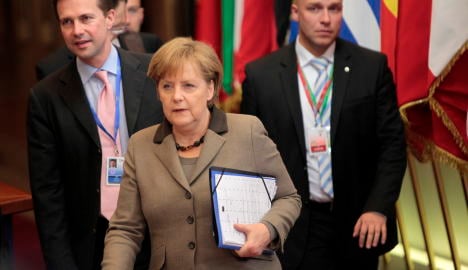 “Given the situation today, I don’t see a military engagement,” Merkel said, putting the brakes on a push by France and to a lesser extent Britain for tougher action against Muammar Qaddafi’s regime.

However, “each day presents us with a new situation,” she added after an emergency summit of European Union leaders in Brussels.

Merkel stressed that in all cases, “a clear legal basis,” which the bloc accepts means a United Nations Security Council resolution, would be required for military intervention, based on demonstrable need and strong support from regional partners.

“If all the conditions are met, we could look at whether it should be on the table,” she said.

But for now, Berlin wants to “wait and see how things evolve.”

Meanwhile, the foreign ministry in Berlin said a high-ranking German diplomat spoke by phone with the “foreign minister” of the Libyan opposition on Friday.

“Within the framework of contacts with the Libyan opposition, there was a conversation between a high-ranking German diplomat with the ‘foreign minister’ of the opposition National Council, Ali Aziz Al-Eisawi,” the ministry said.

“In this conversation, the German side said that a new Libyan government must come from elections and be representative as well as inclusive,” the German foreign ministry said.

“Contacts will be continued.”