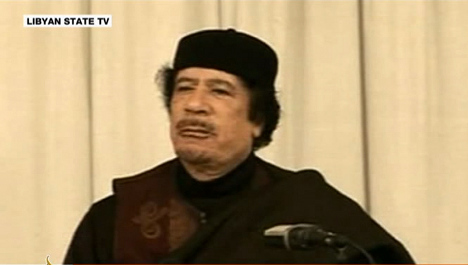 “It has to be completely clear that someone waging war against his own people is no longer a negotiation partner for the European Union,” Merkel said while attending a European Union summit in Brussels on the unrest in Libya.

“We want to do all that we can to limit the suffering of the Libyan people,” she said. “However, we have to carefully think through the measures that would lead to a proper resolution.”

In a surprise move, Sarkozy said Paris and London favoured targeted strikes in Libya in the event of Qaddafi bombing his own people.

But Germany’s foreign minister on Friday urged caution on the issue of recognising the Libyan opposition, despite calls from London and Paris to ramp up pressure on Qaddafi’s regime.

Speaking to reporters in Berlin, Guido Westerwelle said: “I advise everyone to look very closely to see if these people who say they represent the people are really speaking in the name of the people.”

“We absolutely need to know in what direction these new forces want to go. Do they want a democracy? An election? A transformation?” asked Westerwelle. He said the views of other countries in the region were also crucial.

Speaking about a proposed no-fly zone over Libya, Westerwelle said: “A no-fly zone is not like putting up a traffic sign, it is an attack with bombs, with rockets, with weapons.”

“And what would we do when it doesn’t work? Would we then go in with ground troops? I am very sceptical about this,” he said. “Before one goes into a war, you really need to have thought through things to the end.”