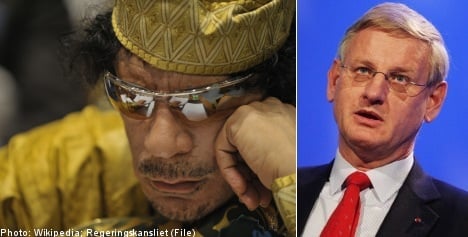 “We no longer consider the Libyan Embassy in Stockholm to be representing anything,” Bildt posted on his official Twitter feed Friday.

When asked to comment on Bildt’s post, foreign ministry spokesman Anders Jörle said “given the unclear situation in Libya, we do not know who represents Libya in Sweden.”

The ministry had been informed that the Libyan envoy in Stockholm no longer had a mandate from Muammar Qaddafi, Jörle added.

As France on Thursday officially recognised rebels opposed to the Libyan leader, Bildt tweeted “Sweden recognises states – not regimes. And most other EU countries are the same. Somewhat unclear on what France does.”

On February 22, the Libyan embassy in Stockholm raised the country’s independence flag, which was in use until Qaddafi came to power in 1969 and has been used by protesters as a symbol of the ongoing uprising in the country.

But an embassy secretary told AFP at the time it had been raised simply to get demonstrators to leave the embassy, and stressed the ambassador had not resigned.

Medics say 400 people have died and 2,000 more been wounded in eastern Libya since February 17, when rebels opposed to Qaddafi launched an uprising.

A UN official said Thursday more than 250,000 others have fled to neighbouring countries since the revolt started in mid-February.