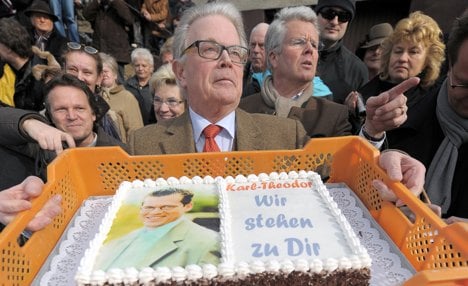 Guttenberg's father Enoch holds a cake with his son's face on it. Photo: DPA

Politicians from Guttenberg’s conservative Christian Social Union (CSU) spoke at the two-hour event in the northern Bavarian town of Guttenberg, where demonstrators carried banners with slogans such as “Gutti was too good for you.”

The rally was organized by the party’s young people’s association Junge Union (JU) to call for Guttenberg’s speedy return to national politics.

Speaking at the event, Guttenberg’s father Baron Enoch zu Guttenberg criticized what he called the “malice and self-righteousness” with which his son had been forced out of office. He said he had not experienced anything like it since 1945. Local CSU politician Gerhard Schneider spoke of a “witch-hunt.”

The 39-year-old was forced to resign earlier this week over revelations that large parts of his doctoral dissertation had been plagiarized. Bayreuth University has stripped him of his doctorate.

There have also been pro-Guttenberg rallies in several other German towns, though they have greeted by mocking counter-demonstrations.