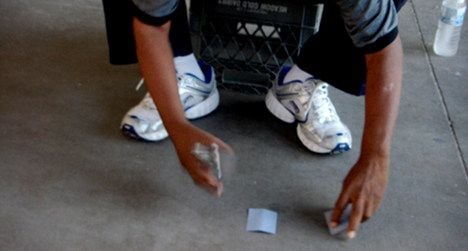 Geneva could soon introduce a law banning three card tricks in the canton, following a long battle to rid the city’s streets of con-artists luring money from tourists.

The game, in which people pretending to be players often conspire with the dealer to cheat victims out of their money, is a common site on the streets of Geneva during the tourist season. Many of the con-artists come to Switzerland on tourist visas from the Balkans, particularly Macedonia.

The Swiss federal gaming commission has now defined three card tricks as “pure scams”. This means that summary confiscation of the tricksters’ money under federal gambling laws is now no longer possible.

Scammers must instead be prosecuted for fraud, something that is making the pursuit of offenders more time-consuming than in the past, Geneva’s president Mark Muller said on Thursday.

“This makes it harder for the police to suppress this effectively. Policing of this needs not only to be severe but also constantly repeated, something that requires simplicity and speed,” Muller said.

Under the changes proposed on Thursday, three card tricks will be banned in all public spaces and all places open to the public.

Under the new law, running such games in public spaces will be made a misdemeanour punishable by fines of up to 10,000 francs.