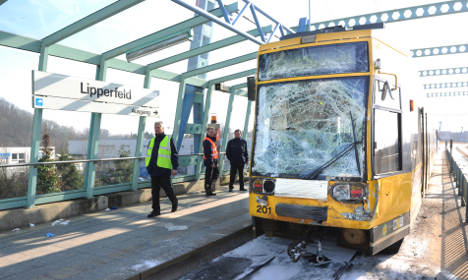 The accident occurred around 11:25 am when the tram rammed into the bus while travelling at full speed. The bus was just leaving the Lipperfield stop, the WAZ media group reported.

“We don’t know why the tram drove into the bus,” said a spokesperson for the STOAG transportation provider, which operates both vehicles.

Some 50 rescue workers and four doctors rushed to the scene and treated the dozens of passengers on board, but authorities could not say if any had sustained severe injuries, police spokesman Uwe Weighardt said.

“We don’t yet know the condition of everyone who had to be hospitalized,” he said.

The tram driver was reportedly also in the hospital and suffering from shock.

The overpass, on which only public transportation vehicles are allowed to travel, was shut down for the remainder of the day.

“It has to be determined whether the tram or the bus are still drivable,” police spokesman Weighardt said.

The busy nine-kilometre-long overpass has been in use since 1996 and connects Oberhausen’s main train station with the Sterkrader station in the north of the city.