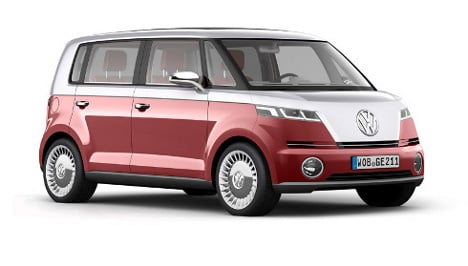 The original Transporter 1, dubbed the “Bulli” in Germany and known as the “Microbus” in America, was first built in the 1950s and went on to become one of the most popular car models ever. The VW bus eventually reached icon status as the vehicle of choice for hippies in the 60s and 70s.

With the debut of the new prototype in Geneva, Volkswagen said its goal to rekindle the spirit of the original, like its previous resurrection of the Beetle.

“It is spacious like it was in 1950, it is as inspirational as ever, and it has clean styling like never before,” Volkswagen said in a statement.

And replacing the old four-cylinder combustion engine is a sleek 85 kW electric motor capable of travelling 300 kilometres on a single battery charge. The motor’s lithium-ion battery pack can be replenished in less than an hour, according to Volkswagen, while a small, range-extending gas and diesel engines are also part of the prototype’s package.

The original model’s iconic circular headlights have also been replaced by slicker dual headlights and LEDs, and rear-wheel power has given way to front-wheel drive.

But perhaps the most decisive step into the 21st century is the iPad-integrated dashboard, including an infotainment system that melds the iPad’s web-based applications with the Bulli’s navigation system, climate control, telephone and sound system.

The new Bulli concept is not the first attempt to revive the legendary bus – but another prototype never made it to the production line after being abandoned a few years ago for being too costly. The new Bulli has more in common with modern compact SUVs and minivans than with the original Microbus.

But one area where the concept car does approximate its predecessor is speed – or lack thereof – with a top speed of 140 kilometres per hour and acceleration from 0 to 100 km/h in an underwhelming 11.5 seconds.

Nevertheless, the Bulli concept is expected to be a star attraction of this year’s Geneva show, which runs through March 13, since VW has been enticing consumers with the idea of a new Bulli since 2001.

However, Bulli enthusiasts will need to wait several years to drive one themselves, though, as no timetable for a possible production model has yet been announced.