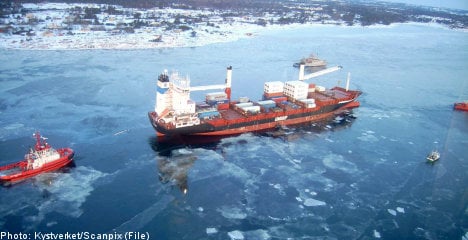 The Godafoss was freed by tug boats on February 23rd

“The Godafoss, which has been grounded near Hvaler near the Norwegian-Swedish border, left the area on its own last night (Monday). During the day (Tuesday), the ship has been leaking oil during its voyage along the western Swedish coast, and it still is,” the coast guard said in a statement.

The container ship ran aground in the Hvaler marine park on February 17, leaking fuel and threatening the fragile eco system in the reserve that is home to a wide variety of marine life and cold-water coral reefs and covering hundreds of sea birds in oil.

The Godafoss, which contained a total of 800 tonnes of fuel when the accident occurred, struck a rock on a well-indicated reef near the mouth of the Oslo Fjord shortly after leaving port in the southeastern town of Fredrikstad for Helsingborg in southern Sweden.

The ship, still holding about 90 cubic metres of fuel, began sailing on its own late Monday towards Odense in Denmark for repair.

It remained unclear why it had undertaken the voyage when it was still leaking oil, according to Ragnhild Bussqvist, a duty officer at the coast guard.

“It is unbelievable,” she told Swedish public radio.

Swedish authorities were on Tuesday working to protect the fragile shore line of Kosterhavet, a Swedish natural reserve located near Norway’s Hvaler, the statement said.

A coast guard vessel had begun cleaning up oil off Gothenburg, Sweden’s second largest city, while another ship was “on its way to scoop up the oil that Godafoss is leaving in a line along the shore,” it said.

A plane was flying over to determine the extent of the damage and to help the vessels locate the oil.