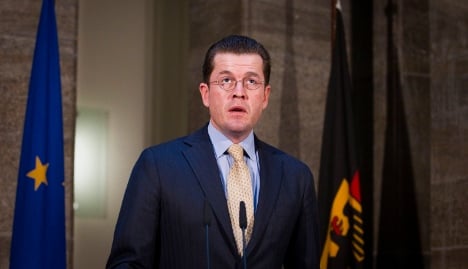 Yes, jealousy and resentment played a role in this drama. An outstanding talent, one who had long been Germany most popular politician, needed to be brought down. He was a good-looking aristocrat, articulate, likeable and charismatic. He was a hands-on kind of guy who didn’t baulk at making unpopular decisions.

And yes, it was about power. Germany’s political opposition had a tough time with Karl-Theodor zu Guttenberg. The harder they attacked him, the more powerful he became. It was almost enough to drive them to despair. Even without a direct comparison to the baron, the leading lights of the centre-left Social Democrats – Sigmar Gabriel, Frank-Walter Steinmeier and Kurt Beck – look rather bland. Put next to Guttenberg and the three suddenly shrink down to grumpy garden gnome size.

And yes, it was also about a media battle: left-leaning broadsheet newspapers and magazines against right-wing tabloids (with a few exceptions).

But Guttenberg’s downfall was, in fact, completely his own doing.

He’s not the victim of insidious machinations or a smear campaign. He’s not a skittish deer, hounded and eventually slain by a bloodthirsty pack. Instead, he simply failed to stay on his feet during the first serious crisis of his political career.

It wasn’t a plagiarized doctoral dissertation that sealed his fate, rather his behaviour after the allegations first surfaced two weeks ago. Discounting the charges as “abstruse,” the coquettish manner in which he dealt with his own mistakes (claiming he was “the original, not the copy”), the defiant way in which he refused to show regret, and how he tried to spin the affair. The public can forgive mistakes, even big ones. But what people won’t pardon are instances of equivocation, semantic dodges (“no deliberate deception”) and faked humility.

The Guttenberg we saw on Tuesday during his resignation speech was the man that many of us would have liked to have seen ten days ago – honest, personal, real.

A resignation with class is made either right away or not at all. Just like the departure by Margot Käßmann, the former head of Germany’s Protestant churches who immediately stepped down after being caught driving drunk. She was quickly forgiven and rehabilitated in the public eye.

The curtain has now closed on this tragic drama. The line between saint and hypocrite, righteous and self-righteous, was often blurred. And plenty of damage was done.

But the wounds can now be healed, the malice forgiven, the taunts silenced. Justice hasn’t been subverted by this affair, but rather served. Values put under strain have been renewed.

Guttenberg is still young. And while one life may be firmly behind him, there are many possible ones still on the horizon. Germany, with its serious dearth of political talent, can ill afford to do without him in the long run.

Angela Merkel, however, is about to embark on one of the toughest periods of her chancellorship. With Guttenberg’s departure, her conservatives lose their only other high-profile politician in a year full of key state elections. Who now is going to draw crowds to election rallies?

For many conservatives, Guttenberg, rightly or wrongly, offered a kind of ideological home and that kind of yearning can’t simply be replaced. Merkel had already gutted her party of conservative ideas long before the Guttenberg affair. Now, there’s no-one to fill the void for her.

Yes, decency has won the day, but the price for that victory will be extremely high.