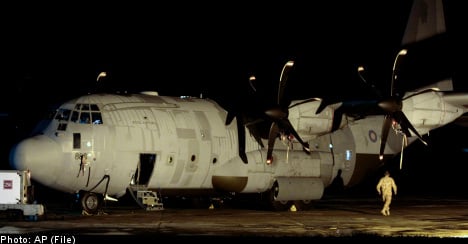 A British C-130 at the airport in Malta

In Valleta, Malta’s capital city, several airplanes, including a Swedish Hercules plane, sit and wait to fulfill the mission of evacuating Swedes and other foreigners from Libya.

But since air traffic control in Tripoli has broken down, it is difficult to obtain permission to land at the airport.

“The information we have so far is that the evacuation process in on-going. We have to expect delays – it’s part of the picture,” Cecilia Julin, spokeswoman for the Swedish foreign ministry, told The Local.

Exactly when the Swedish plane can lift is unclear.

“You cannot get a landing permit in advance,” Ulla Gudmundson, Swedish ambassador to Malta, told the TT news agency.

During the day, a group of diplomats, including one from the Swedish foreign ministry, flew to Tripoli to help organise evacuation efforts.

According to Julin, the Swedish diplomat was aboard an Italian plane which left Malta early Tuesday afternoon to help coordinate evacuation efforts.

“We expect our plane to be put into service later this afternoon. It’s waiting its turn,” she added.

According foreign ministry spokesperson Joakim Larsson, there are a total of 47 Swedish citizens currently in Libya.

“We’re in contact with everyone there, staff from the foreign ministry are calling them continuously. Thirty-seven want to stay, we’re working on getting eight out, and one person wants to leave on their own,” Larsson told TT.

Fifteen of the Swedes are said to be in Benghazi.

Four Swedish soldiers will accompany the Hercules plane, according to Sweden’s Air Base Command.

“We do not know what to expect down there, and if things become unstable, they can provide security. They should simply be available if needed,” Armed Forces (Försvarsmakten) spokesperson Johan Lundgren told the Svenska Dagbladet (SvD) newspaper.

Prime Minister Fredrik Reinfeldt said on Monday that the situation in Libya remains chaotic and unstable, noting that the Qaddafi era in Libya is over.

“But we still have Swedes there. The focus is on getting them out, ” Reinfeldt told TT.

Sweden closed its embassy in Libya in 1995 and therefore Swedes have been asked to report to the German embassy for assistance in getting to the airport.

Foreign ministry spokesperson Joakim Larsson said that there are now 47 total Swedes confirmed in Libya. In the past week, 53 Swedes had left the country.

The Swedish Hercules plane, loaded with eight pallets of medical supplies in Sweden, has been unloaded in Malta. The supplies will now be transported by other means to Benghazi in eastern Libya.

“We hope the medical equipment will soon be on its way on a British ship,” Gudmundson told the TT.

According to Swede Laila Säfström, who is in Tripoli, the city has been calm in recent days, the shops have been open sporadically and there are goods available for purchase.

The coastline of the Sicilian island of Lampedusa. Photo: Alberto Pizzoli/AFP

The peace conference in Palermo on November 12 and 13 will aim to “identify the stages of a stabilisation process”, Italian Foreign Minister Enzo Moavero Milanesi told the Senate.

The meeting would drive towards “a common solution, even if there are differences of opinion between the parties involved”, he said.

Four key leaders from Libya agreed at a conference in Paris in May to hold landmark polls on December 10 as part of a French-led plan to stabilise the crisis-hit country despite ongoing violence and deep divisions.

France, however, has faced opposition to the election timetable from the United States along with other European Union countries, notably Italy.

Milanesi said he had received “confirmation of interest” in the conference from Libyan military strongman Khalifa Haftar as well as support from the US, and was planning on discussing the dossier with his Russian counterpart Sergei Lavrov in Moscow on Monday.

“No deadlines will be imposed on the Libyans, nor tasks dictated,” Milanesi said.

Italy, a key supporter of the UN-backed government of Fayez al-Sarraj in Tripoli, said in September it wants to “maintain an active dialogue” with all well-intentioned actors in Libya.

The Libyan capital has been at the centre of a battle for influence between armed groups since dictator Moamer Kadhafi was driven from power and killed in a 2011 NATO-backed uprising.

Sarraj's Government of National Accord has been unable to form a functioning army or regular security forces and has been forced to rely on militias to keep Tripoli safe.

Militias formed the backbone of the uprising that toppled Kadhafi.

Since then rival administrations, including one allied with Haftar and based in the remote east, and the militias have competed for authority and oil wealth in the North African country.

Accused by his opponents of wanting to establish a new military dictatorship, Haftar refuses to recognise the authority of Sarraj's Tripoli-based GNA.

PARTNER CONTENT
Five unusual things you can do in Malta
Url copied to clipboard!