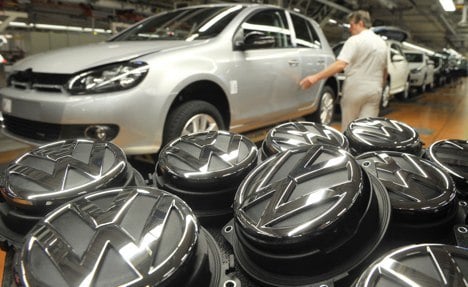 Net profit got a boost from VW’s strong presence in China and other emerging markets, financial investments and the value of options related to its holding in luxury sportscar maker Porsche, which VW wants to make its 10th brand.

VW operating profit soared to €7.1 billion, more than three times the year-earlier figure of €1.9 billion, on sales up 21 percent to €126.9 billion.

For the first time, the German group delivered more than seven million vehicles worldwide, posting a gain of 13.7 percent to 7.2 million units.

He forecast that at the present rate, VW’s 2018 annual sales target of 10 million vehicles might be reached two or three years ahead of schedule.

For now, “fiscal year 2010 was the best year in the history of the Volkswagen Group,” VW chairman Martin Winterkorn said in the statement.

The company reaped the fruits of its investments in markets like Brazil as it pursued its goal to overtake Toyota as the world’s biggest automaker by 2018. It has teamed up with Japanese carmaker Suzuki in India and is working on a deal with GAZ in Russia.

In the United States, VW wants to nearly triple sales by 2018 and is building a new plant to turn out a model designed specifically for that market.

Looking ahead, the company said it expected sales, deliveries and operating profit to reach new highs this year but did not give detailed figures.

The strong results, along with a capital increase of more than €4 billion last year, underpinned VW’s financial position and provided flexibility as it pursues its integration of Porsche, the statement said. VW owns 49.9 percent of the sportscar manufacturer.

VW shares jumped 5.47 percent to €118.6 in late trading, while the DAX index on which they led gainers was 0.72 percent higher overall.

On Thursday, VW shares had slumped heavily on doubts over its planned merger with Porsche owing to a probe by the prosecutor’s office in Stuttgart, southern Germany that focused on former Porsche executives.

Full details of VW’s results are to come at the group’s annual shareholder’s meeting on March 10 at the company’s headquarters in Wolfsburg, northern Germany.