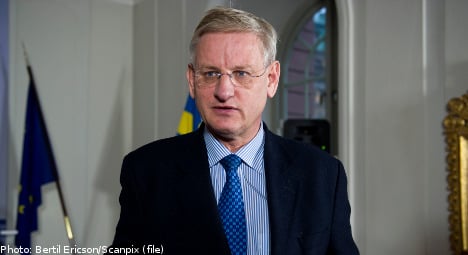 Writing on his blog as he prepared to embark on a trip to the Middle East for talks with Arab and Jewish leaders, Carl Bildt described the situation in Libya as “terrible”, and rejected criticism from some Swedish commentators for not take a tougher stance against the embattled Libyan leader, Muammar Qaddafi.

“The highest priority is to get the Swedish and EU citizens out of the country – at the same time as we try to put a stop to the violence against innocent people,” Bildt wrote.

Amid speculation about possible sanctions and NATO military intervention as the Qaddafi regime becomes increasing desperate in its methods, Bildt was reticent on details.

“As long as we have our citizens there there are unfortunately also limits to other measures we can discuss. Openly anyway.”

The Swedish foreign ministry on Friday morning announced that Swedes in Libya, reported to be around 50 in number, should make their way to the airport in order claim seats on an Alitalia plane waiting to leave.

“This information remains up to date, the plane remains at the airport and Swedes are encouraged to make their way there,” said Sara Brandt-Hansen at the foreign ministry to The Local on Friday afternoon.

The foreign ministry advises all those who make it out to the airport to remain at the collection point and not return to Tripoli whether they manage to secure a seat on the flight or not.

“We are coordinating evacuation efforts across the EU – as soon as there is a flight, we are working to get Swedish nationals on it,” Brandt-Hansen said.

As the turmoil continues in Libya with Qaddafi’s forces clashing with opposition groups at several locations across the country, there are mounting fears in some quarters of the EU that a full-scale civil war will result in a large number of refugees arriving on European shores.

Sweden’s migration minister Tobias Billström yesterday rejected demands from Italy for help to accept refugees from north Africa, arguing that the Italian government was exaggerating when it spoke of a human wave of “biblical proportions”.

“Italy has accepted 5,000 refugees. But Sweden accepted 32,000 asylum-seekers last year in relation to a population of 9 million people. Italy has 58 million inhabitants,” Billström said in Brussels on Thursday.

Billström called for continued EU cooperation on the issue, but argued that the talk of “waves” and “biblical proportions” needed to be given greater nuance.

“To help people in trouble at sea is of course completely self-evident, but I don’t envision any great migration of people from these countries,” he said.

The European Commission has dismissed reports in European media that around 750,000 people from across northern and central Africa are lined up along the Libyan coast waiting to flee.

The UN refugee organ UNHCR has said that the figure is more likely to be closer to 5,000.