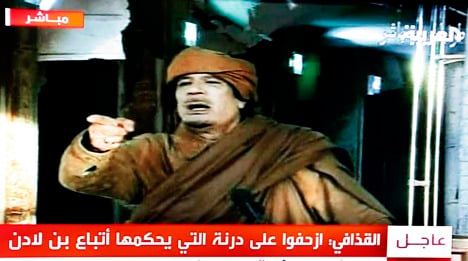 “We are calling on the Libyan authorities to stop the violence against their own people,” Merkel told reporters at a joint press conference with Greece’s Prime Minister George Papandreou.

“If the violence does not stop … we will consider sanctions,” she added.

During his speech on Libyan television, Gaddafi vowed to hunt opponents of his regime, purging them “house by house” and “inch by inch.”

Merkel said that the reports being received of the situation on the ground in Libya were “extremely worrying.”

“Muammar Gaddafi’s speech today was very scary as he has declared war on his own people,” Merkel added.

The German Foreign Ministry summoned the Libyan ambassador in Berlin in reaction to escalating violence by security forces against pro-democracy demonstrators in the North African country.

Jamal El-Barag was called to the ministry where officials “stressed” that the violence towards peaceful protesters is unacceptable and must end, they said.

Freedom of speech and the right to gather peacefully must be ensured, and Libyan leaders must seek dialogue with the demonstrators, they added.

On Tuesday Foreign Minister Guido Westerwelle spoke in favour of democratic change in the country.

“We can’t stand by and watch people be murdered,” he told broadcaster ZDF. “It is fully clear to us as democrats that we can’t just look on speechless when other democrats must fear for their lives or have them taken.”

He also announced that all German citizens would be evacuated from Libya.

“Everyone needs to get out and we’ll help get it done,” he said.

The Foreign Ministry has issued a travel advisory for the eastern parts of the country, urging people to avoid the country’s second-largest city Benghazi in particular.

All Germans already in the country were urged to leave. Currently some 500 Germans are estimated to live in Libya, many of whom have dual citizenship.

Meanwhile on Monday the European Union harshly criticised Gaddafi, condemning the crackdown against civilians as the death toll rose to an estimated several hundred.

Among the wave of protests to sweep through the region following the popular uprisings in Tunisia and Egypt, Libya has seen the bloodiest resistance from its regime.

On Tuesday morning, reports emerged that security forces there had used fighter jets and helicopters against protesters.