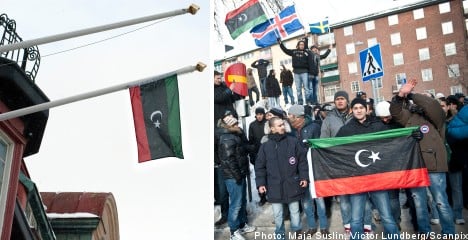 A delegation of three people from among a group of protesters gathered outside Libya’s embassy on Valhallavägen in Stockholm entered the embassy on Tuesday afternoon.

The group presented demands to the embassy’s second-in-command that Libya’s independence-era flag, which has become a popular symbol among anti-government protesters, be raised outside the Libyan mission in Stockholm.

Other demonstrators braved the falling snow to gather outside the embassy, with one many standing high on a pile of snow waving the flag of Libyan independence, which was the country’s official flag from 1951 until 1969 after the country gained independence.

Also known as the flag Kingdom of Libya, it consists of a white crescent-and-star on a triband red-black-green design.

Between 50 and 100 protesters had gathered in the central Stockholm square Sergels Torg earlier Tuesday shouting “Down with the dictator!” and “Qaddafi, murderer!”, before marching to the embassy to replace the current all-green flag.

The red, black and green flag was raised shortly before 3pm to thunderous applause from onlookers, some of whom in their enthusiasm threw their arms around the deputy ambassador, the TT news agency reported.

“We did this because it was a condition set by the demonstrators before leaving,” explained an embassy secretary to the AFP news agency and a few other reporters through a cracked door.

“But the ambassador has not resigned,” he insisted.

Earlier in the day, a tearful demonstrator attempted to scale the walls of the building to hoist the independence-era flag, but was stopped by police and other protest leaders.

Shaban Elgale, a Libyan-exile and spokesperson for the Libyan Action Committee in Sweden, said that Tuesday’s demonstration includes tougher demands than the one arranged on Monday.

“Yesterday we got the embassy to raise the green Libyan flag; today we want them to raise the independence-era flag,” he told the TT news agency.

One of the demonstrators, Palestinian-born Libyan national Walid, said that Colonel Muammar Qaddafi’s appearance on Monday night shows that the leader is shaken.

On Monday, three non-diplomatic employees at the embassy announced in an open letter that they were quitting to protest the bloody crackdown on demonstrators in Libya, which human rights groups say have so far cost up to 400 lives.

Protesters take part in a demonstration in solidarity with the Palestinians called over the ongoing conflict with Israel on May 15, 2021 at Hermannplatz in Berlin. STEFANIE LOOS / AFP

Around 3,500 people had gathered in the German capital’s Neukölln district on Saturday afternoon in one of several rallies over the escalating conflict in the Middle East, according to police.

Protesters threw stones, bottles and fireworks as police tried to break up the demonstration, injuring 93 officers and prompting them to use pepper spray.

Several people were being investigated for shouting “anti-Israel slogans”, the police said.

Around 900 officers were deployed to several demonstrations during the day, with the others passing mainly peacefully.

Palestinian militants have launched more than 3,000 rockets into Israel over the past week, according to Israel’s army, which has launched hundreds of air strikes on Hamas and other Islamist groups in the crowded coastal enclave of Gaza.

The most intense hostilities in seven years were triggered by weekend unrest at Jerusalem’s Al-Aqsa mosque compound, which is sacred to both Muslims and Jews.

Germany has seen several scattered demonstrations over the escalating conflict, with protesters shouting anti-Semitic slogans, burning Israeli flags and damaging the entrance to a synagogue with stones.

The Central Council of Jews in Germany on Sunday said it had received “a torrent of the most vile anti-Semitic insults” on social media.

Council president Josef Schuster urged the police to take a hard line against anti-Semitism and said recent events had been “reminiscent of the darkest times in German history”.

Interior Minister Horst Seehofer on Sunday said Germany would crack down hard on anyone found to be spreading “anti-Semitic hatred”.

“We will not tolerate Israeli flags burning on German soil and Jewish institutions being attacked,” he told the Bild am Sonntag newspaper.

Speaking at an ecumenical church congress, President Frank-Walter Steinmeier also said “nothing can justify” threats to Jews in Germany or attacks on synagogues.

Some six million Jews were murdered during the Holocaust under Adolf Hitler’s Nazi regime.

The Jewish community in Germany has been growing since reunification in 1990, notably with the arrival of many thousands of Jews from the former Soviet Union.

The arrival of refugees from Arab nations hostile to Israel, in 2015 and 2016, added to the prevailing anti-Semitism in some Muslim circles in Germany.