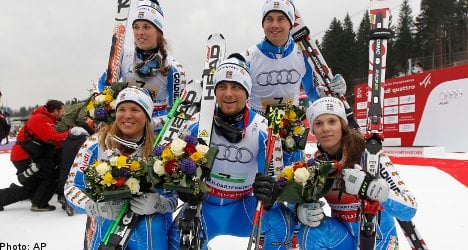 racers after finishing 2-2 against Austria, while Sweden took the bronze after

they demolished Italy 4-0 in the third-place play-off.

With each team sending two men and two women down the giant slalom course,

head-to-head against a member of the opposite team in a parallel race, the knock-out event was fast-paced and fun to watch.

In the final, victories by Cyprien Richard and Anemone Marmottan gave the French victory, as their four racers were faster overall than their rivals.

This is France’s first gold medal at a world championships since Regine Cavagnoud won the super-G in 2003 at St Anton, Austria.

Austria, who won the team event the last time it was held in 2007, booked their place in the final as they steamrolled Italy 4-0 in the semi-final.

As well as losing the gold, Austria also lost experienced giant slalom-specialist Benjamin Raich who picked up a knee injury in the quarter-final win over Croatia.

The 32-year-old was taken to hospital in Innsbruck and is doubtful for Friday’s giant slalom, the event in which he won world silver two years ago in Val d’Isère.

France had a tough route to the gold-silver race as they had to hold off a stiff challenge from Sweden, led by Anja Pärson, which ended 2-2.

The French went through, because of their faster time.

In the bronze medal race, Sweden blew away Italy 4-0 with Pärson, Matts Olsson, Maria Pietilä Holmner and Hans Olsson all winning their races.

The fortnight-long championships continue on Thursday with the women’s giant slalom and finishes Sunday with the men’s slalom.