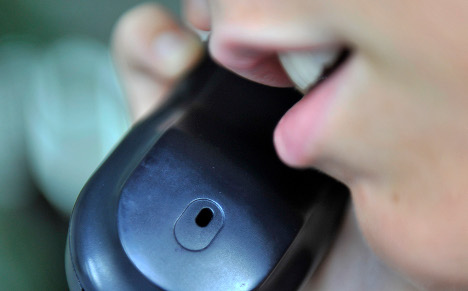 Deike Schipper coughs heavily into the telephone receiver and waits.

“You appear to have a rather dry cough,” a friendly female voice eventually responses. “Please seek advice from your doctor or pharmacist on how best to handle your cold. We hope you get well soon.”

Developed by researchers in the northern German city of Oldenburg, the country’s first automated cough-recognition service is meant to diagnosis the type of illness affecting the 27-year-old and let her know what treatment would be most appropriate.

The idea behind the “cough line” is to provide patients with an initial assessment of their ailment and make them aware that not all coughs are the same, said Stefan Goetze of the Fraunhofer Institute for Digital Media Technology.

“The device is not intended to take the place of a visit to the doctor or pharmacist,” says Goetze, who developed the software with three colleagues.

The program’s main purpose is to inform people, Goetze adds, citing a survey showing that only half of all Germans recognize the variety of forms the common cold can take.

If a patient calls and coughs into the receiver, the software recognises if the cough is phlegmy – also known as productive coughing – or a dry, tracheal cough. Occasionally there are also coughs that cannot be clearly identified.

In over two years of research, Goetze and his team recorded sample coughs in the crowded pedestrian zones of Hamburg and Oldenburg, analysed the coughs for salient characteristics specific to their type, and then categorized them in the software database.

Now, when a caller coughs into their telephone, the software identifies the acoustics of the cough with a high rate of success.

“In 80 percent of all cases the assessment made by the telephone was correct,” says Goetze.

When the telephone line at the start of the cold season in November, Goetze and his team estimated a maximum of 30 callers per day.

“But now we’ve been getting about 200 calls every day,” he says.

Although the researchers emphasise that telephone-based cough analysis is not meant to replace visits to the doctor, some in the medical community remain sceptical.

“I find the telephone problematic, because a cough’s characteristics can fluctuate and are too easily affected by factors like age, weight and gender,” says Heinz Jarmatz, chairman of Lower Saxony’s Association of General Practitioners.

Jarmatz fears that the cough-recognition telephone might produce too many self-diagnoses, and that only a doctor can properly assess the general condition of a patient.

Even the cough-stricken Schipper remains unconvinced by the high-tech software.

“I think it’s quite fun, but I’m not sure one should depend on it completely,” she says after her test call.

For her current cold, she still intends to visit a real doctor.