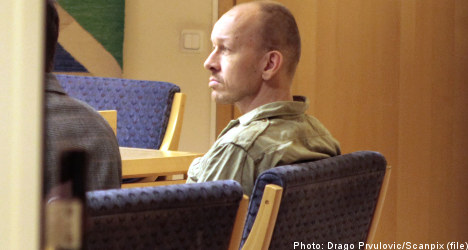 In total, the man, who has been identified as Peter Mangs, is now suspected of a total of three murders and 14 attempted murders.

Chief prosecutor Ola Sjöstrand declined to reveal which additional attempted murders Mangs is now under suspicion, saying only that they were committed in the last year.

According to the Sydsvenskan daily, Mangs is also under suspicion of conspiring to murder and vandalism. Sjöstrand refused to elaborate further on those cases.

Since his arrest in November Mangs, 38, has consistently denied committing any of the crimes for which he is suspected and any eventual trial will hang on forensic evidence.

“We have received some advice from the Swedish National Laboratory of Forensic Science (Statens kriminaltekniska laboratorium, SKL), but it is not all finished yet,” said Börje Sjöholm of the county police.

A new remand hearing was not necessary after Mangs voluntarily agreed to remain in custody.

“And we will not demand he remain in custody for the new cases right now, it is not necessary,” said Sjöstrand.

Mangs remains in detention as a suspect on probable cause since he could obstruct the investigation and according to the district court, there is a risk he could continue to engage in criminal activity.

Mangs is currently in custody on suspicion of the murder of a young woman in the autumn of 2009 and five cases of attempted murder.

He is also a suspect in the murder of two men in Malmö’s Lindängen district in the summer of 2003 and an additional five cases of attempted murder from 2006 to 2010.