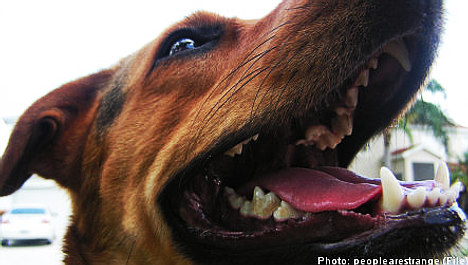 The first-ever discovery of the tapeworm parasite Echinococcus multilocularis (Rävens dvärgbandmask) in Sweden has direct consequences for dog owners in Sweden who have been recommended to deworm their dogs.

The agency warned on Thursday that dogs can pass the tapeworm onto humans without becoming sick, or showing symptoms of infection themselves.

Dogs should be kept on a leash and bags containing dog faeces should be placed in containers for combustible waste.

The scope of the infection is not yet known. In the meantime, SVA recommends deworming for dogs who live in Uddevalla, Färgelanda, Munkedal and Vänersborg municipalities and frequent the forest and countryside, where they can come across opportunities to eat rodents.

The area was chosen based on the distance the SVA believes that the infected fox could have travelled.

“He usually comes and wakes me up with a lick in the morning,” said Morgan Karesund from Ödeborg outside of Färgelanda when he heard about the SVA’s recommendations.

He was walking in the woods with his pointer Blixten when he heard about the infected fox.

“I have a hunting dog, so I am often out in the woods. I tend to deworm him every autumn because he is out running around everywhere, but they usually tell people to not do it then,” said Karesund.

He thinks it sounds like a lot of deworming every four weeks.

“It is a virus that the dog gets. Every four weeks, it is a lot. However, what is the alternative? I will have to read the recommendations before I make a decision,” said Karesund.

“But if I believe it works, I will probably do it. I pick a lot of mushrooms, so I do not want to get it here,” he added.

At the same time, he will not stop his dog walks in the forest.

“It is the same with snake risk, they are everywhere. I cannot go around and worry, if it happens, it happens,” said Karesund.

When a dog becomes infected, it takes 28 days before the tapeworm starts secreting eggs, so it can pass the infection onto its owners.

The eggs can become trapped in the dogs’ fur, so people in the area should engage in proper hand hygiene after contact with dogs.

An infected dog that is dewormed is free from infection within three days. Intensive work with the taking of specimens is under way to see whether the recommendations or area need to be extended.

“We naturally take it very seriously. The same applies to adults and children regarding kissing dogs, even if it is naturally harder to say so,” said Bodil Ström Holst, a veterinarian at SVA.

As for cats, who also hunt rodents, there are no recommendations because it is unclear whether they secrete the tapeworm infection.