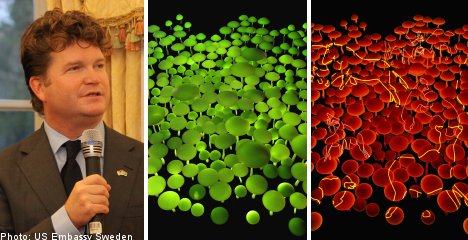 While the recent blast of heavy February snow left many Swedes shaking their fists at the resurgent winter weather, the new blanket of fluffy white powder brings a smile to the face of US ambassador Matthew Barzun and his wife, Brooke.

As it turns out, the fresh snow makes for a perfect canvas on which to view a newly installed public art project designed to celebrate the Swedish winter in “A Different Kind of Light”.

Consisting of a specially-created video art instillation by Brooklyn-based artist Chris Doyle entitled “The Underglow”, the project is meant to show that the darkness of the Swedish winter can be a thing of beauty.

The installation, which features a 3D animation of mushrooms presented in three parts, each one representing a type of light, is a gift to the people of Stockholm from the Barzuns.

It will be projected from the US ambassador’s residence on Nobelgatan onto the park below every morning and every evening until March 25th.

Ambassador Barzun was inspired to move ahead with the public art project as a way to heed the call of US president Barack Obama to increase and diversify US engagement in the world.

“I think engaging the next generation is so important,” Barzun tells The Local, before turning his thoughts to the recent youth-led revolution in Egypt.

“Look at Egypt today: 60 percent of people in Egypt are under the age of 30. So, they don’t remember America’s role in World War II. They have more recent memories and we need to engage with them and help them understand what we’re about as a country.”

Doyle chose to focus his work on mushrooms after visiting Sweden for the first time last September.

The recent removal of a diseased 150-year-old tree that was beloved by the ambassador and his family led Doyle to reflect on the fungi which sprout from death and decay. During subsequent dinner conversation he learned of Swedes’ love for mushrooms, allowing him to make connect his reflections to Sweden.

“In a way, this piece is more about my experience of this place,” Doyle says.

“So, whether or not it’s successful on the level that people recognize it and think, ‘That’s so Swedish’, for me, it represents my experience of Sweden.”

The first part of Doyle’s work depicts bright green bioluminescent mushrooms, which are thought to have been used by Swedes in medieval times to guide them through the long winter.

“I sort of thought of the embers, the stars, and the bioluminescence as three ways of lighting up the winter,” Doyle explains.

Doyle also said he hopes that viewers who stumble upon the work will experience an unexpected “shiver of magic” in their day.

The focus of Doyle’s work on subjects that are able to create energy from the earth (as mushrooms don’t grow through photosynthesis) also serves as a step by connecting to President Obama’s goal of “trying to save the climate, create new jobs and clean energy,” the ambassador said.

The Barzuns have also made some strides themselves in implementing climate-friendly measures, recently converting the heating in the ambassador’s residence from gas to geothermal.

In addition, the electricity used to project “The Underglow” from the residence is 95 percent hydro-powered and 5 percent wind-powered, the ambassador explains.

In unveiling the public art project, Barzun describes his recent realization of the “power of art to start new conversations and to start new ways of thinking.”

“That’s what President Obama has charged us and all of us as American diplomats [to do] – to engage with the world, to start new conversations to tackle the challenges we confront,” says Barzun.

He hopes that Stockholm residents would ultimately take two things away from viewing “The Underglow”:

“One, I hope that they will appreciate it as a gesture of thanks to the people of Stockholm and of Sweden, who have been so welcoming to Americans for 200-plus years of our official relationship,” he says.

Secondly, the ambassador wants the presentation of Doyle’s work to mark the “beginning of new conversations” about the ways in which Sweden and America “can have a more sustainable future together.”