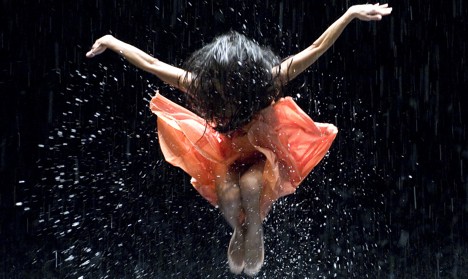 German Oscar-nominated directors Wim Wenders and Werner Herzog unveiled features that push the limits of 3D cinema, which until now had been a money-spinning vehicle for mass-market movies like “Avatar” and “Toy Story 3.”

And France’s Michel Ocelot presented “Tales of the Night,” a fairy tale in 3D based on his silhouette animation television special. The film is in the running for the festival’s Golden Bear top prize, to be awarded Saturday.

Wenders’s “Pina,” which showcases the work of the late German choreographer

Pina Bausch, had been years in the planning.

He said he had long struggled with how to bring Bausch’s trademark graceful athleticism and emotional rawness to life on screen and found the answer when he watched a groundbreaking U2 concert film in 3D at Cannes in 2007.

“I never knew if my craft would tell me how to do justice to it,” the “Buena Vista Social Club” director told reporters after a warmly applauded press screening, referring to his friend Bausch’s work.

“And I felt only when the dimension of space was added to our language that I was able to enter the dancers’ very own realm. So that’s why it took so long.”

The film was conceived as a collaboration with Bausch but her sudden death in 2009 nearly led Wenders to abandon the project.

It was the dancers from her Tanztheater Wuppertal in the Ruhr Valley, where

Bausch worked for more than 35 years, who convinced him to press on. Twenty-one of the performers are due on the red carpet for the premiere later Sunday.

The picture takes the choreography from the rehearsal stage to the city’s roughly beautiful industrial spaces. Intercut are interviews with the performers, who were still mourning Bausch’s loss, adding a deep emotional undercurrent to the film.

“Pina was in a very powerful way always there,” Wenders said of the filming. “She was always looking over my shoulder and I would ask her, ‘Pina, am I doing this right?’,” he said. “Pina had sharpened her eyes to what the soul tells through our bodies.”

Meanwhile Ocelot’s film tells the story of two children who go on a magical journey when they spend the night in an old rundown movie house.

Ocelot said that 3D opened up new vistas to serious filmmakers but he warned against forgetting the fundamentals of cinema.

“The important thing is to have something to say, beautiful images to show and something to share with people,” he told reporters.

Herzog’s documentary “Cave of Forgotten Dreams” shines a light on what are believed to be the world’s oldest cave paintings, in southern France.

The 400 haunting murals in the Chauvet Pont d’Arc cave in the Ardeche valley were only discovered in 1994 and are believed to be more than 30,000 years old.

The cave is closed to the public to protect the precious drawings. Herzog was chosen as the sole film-maker to present them to the world.

A specially built hand-held camera captured the paintings in relief, revealing how the ancient artists used the grotto’s own contours to add nuance to their work.