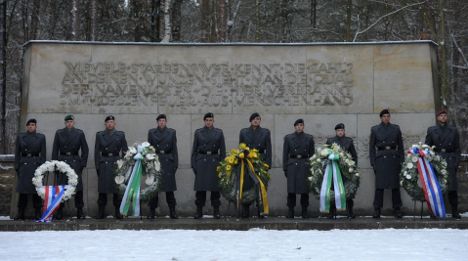 Some 17,000 people braved snow and sub-zero temperatures to form the three-kilometre (two-mile) long chain, the authorities said, as far-right extremists congregated ahead of a planned “funeral march” through the city.

Thousands of police kept the neo-Nazis away from anti-fascist activists and the protests had passed off largely peacefully by early afternoon.

“There are so many people here who want to express their opinion clearly and make Dresden a tolerant, friendly and strong city, open to the world. I am proud and grateful,” said the city’s deputy mayor Detlef Sittel.

The day began with a wreath-laying ceremony at a cemetery where thousands of victims are buried, attended by Stanislaw Tillich, who heads the state government of Saxony and the British ambassador to Germany.

It was 66 years ago that a massive Allied bombing raid on the city killed thousands of civilians in a raid which has since been criticised as strategically unnecessary as Hitler’s forces were already pretty much defeated.

The number of those who were killed has also been controversial, with an official estimate lowered to 25,000 a few years ago. Prior to that, hundreds of thousands where thought to have died in the raid.

The city banned anti-fascist demonstrations from being held too close to the march planned by the neo-Nazis – restricting them to the other side of the Elbe River in the new area of the city, while the neo-Nazis were permitted to march in the old part of town.

Brigitte Siebert, 64, said she joined the human chain both to protest against the neo-Nazis’ misuse of the anniversary and to remember the bombing.

“I will not allow them to lord it over this day,” she told news agency AFP, referring to the far-right extremists. “My mother saw Dresden burning. You don’t forget that.”

Tensions were even evident among the politicians laying flowers at the Heidefriedhof where thousands of the bombing victims are buried, with around 100 extremists mixing among the crowd – including several far-Right National Democratic Party (NPD) members of the state parliament.

Sittel called upon the whole city to mark the anniversary, he warned against allowing the day to be used by neo-Nazis.

He said that the victims were being commemorated, “in the knowledge of the nights and days in which previously, Warsaw, Rotterdam and Coventry were turned into rubble and ashes by German bombers.”