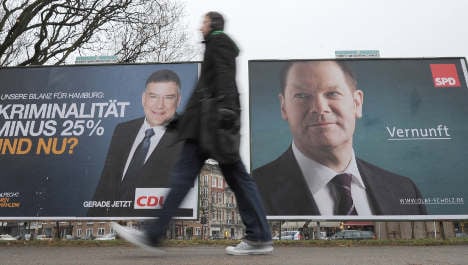 Hamburg’s state election was prompted by the collapse of the previous coalition between the conservative Christian Democratic Union (CDU) and the GAL, as the Greens are known in the city.

A poll conducted by TNS Emnid polling firm showed that the centre-left Social Democratic Party (SPD) could get 45 percent of the votes, with GAL gathering 15 percent – easily enough to form a majority coalition.

Current mayor Christoph Ahlhaus’ conservative CDU is expected to attracted just 24 percent, while the business-friendly Free Democratic Party (FDP) is trailing with five percent, just enough to get into the state parliament. The Left party is expected to get six percent, according to the poll.

The Greens in the western state could expect 13 percent, a figure that has remained constant over the last week, which would give a red-green coalition a clear majority in the state.

The Left party could enter the state parliament there for the first time if they manage to turn their predicted five percent into actual votes when people go to the polls in six weeks. The FDP will have to increase their predicted four percent if they want to get seats in the parliament.

This year has been dubbed the super-election year as seven states are set to hold elections. Hamburg leads the way on February 20, followed by Saxony-Anhalt on March 20, Baden-Württemberg and Rhineland Palatinate on March 27, Bremen on May 22, Mecklenburg- Western Pomerania on September 4 and Berlin on September 18.

While local issues are likely to be crucial in some states such as Baden-Württemberg where opposition to the Stuttgart 21 rail development has become a huge consideration, many will be taken as a measure of how well Chancellor Angela Merkel’s CDU-FDP coalition is performing nationally.