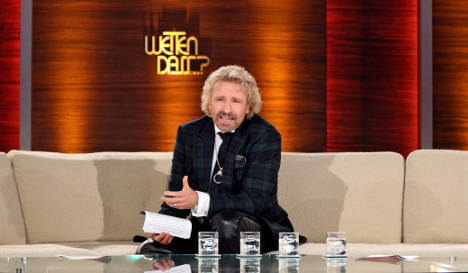 Gottschalk, 60, announced his decision on Saturday evening during the 30th anniversary show of the wildly successful programme which regularly books world-class stars and mixes music, chat and challenges performed by members of the public.

More than 10 million people saw his live announcement that he would stop presenting the show after a run of 24 years. He could not present the relentlessly upbeat show with what he said was a shadow hanging over it.

Candidate Samuel Koch seriously injured his spine after falling badly while using spring boots to jump over moving cars during the show in December, and has been paralysed since. Gottschalk’s producers came under criticism in the wake of the accident for allegedly introducing increasingly dangerous stunts in a bid to secure ratings.

But although Gottschalk will be gone – and he will present the next six shows until the end of the year – Wetten, dass..? will continue, said Thomas Bellut, ZDF programme director on Saturday evening. The show will take a six-month break after Gottschalk’s last programme, but will then continue with a new presenter.

And Gottschalk will not disappear from German television screens – ZDF will keep him on, and is planning a number of big appearances for him, including a fundraising gala for Ein Herz für Kinder, as well as a show called Menschen 2011 and Echo Klassik.